By David Miller David@poncacitynews.com
Time to read
2 minutes
Print
a- a+
Published 1 week ago
Last updated 1 week ago
Read so far
In-page image(s) 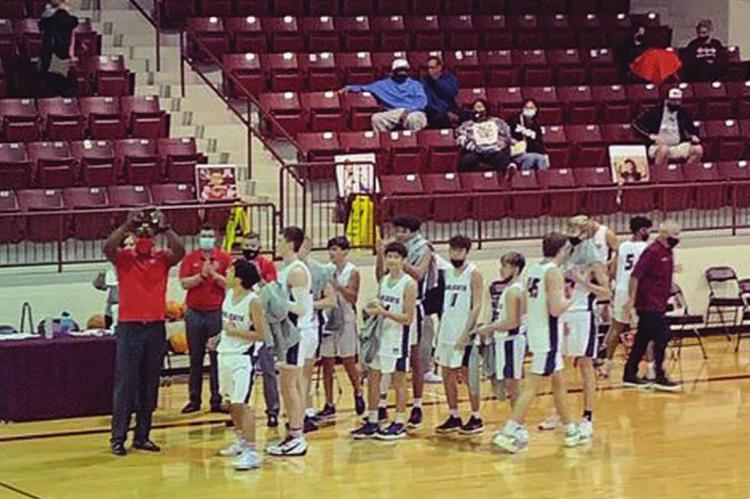 In Friday’s game, the Lady Cats led Durant from start to finish. The lead was 13-6 after one quarter, 30-14 at the half and 45-23 after three quarters. The Lady Cats scored eight points in the final quarter while holding Durant scoreless.

The Ponca City defense was intense throughout the contest.

Carlie Badley led the Ponca City scoring with 20 points. She hit nine out of 10 free throws. Also in double figures was Ashlynn Fincher, with 14. Fincher had four three-point baskets in the game. On Saturday, Ponca City lead 19-16 after a high scoring first

On Saturday, Ponca City lead 19-16 after a high scoring first quarter. The Lady Cats extended their lead over Eisenhower 29-22 at the half. The score was 36-30 after three quarters and Ponca City outscored Eisenhower 15-14 in the final period.

Ashlynn Fincher led the Ponca City scoring with 17 points. She hit three three-point baskets in the first tquarter, her total for the game. Also in double figures was Emma Gertken with 10 points.

“I was really proud of the girls,” Ponca City Coach Jody Fincher said. “They are trying to figure things out on the fly this year. They’ve been working hard and trying to put all the pieces together.”

“We gave great effort this weekend. Our upperclassmen led us on the court and our young ones played hard and are improving every day,” he added.

With the wins, the Lady Cats are 2-1 on the season. The Ada tournament was the first games they had played as all December games were wiped out by COVID-19 protcols. Next on the schedule will be a game on Tuesday at Putnam City

The Wildcats had little trouble in disposing of their first consolation bracket opponent. They jumped out to a 14-3 lead in the first quarter over Harrah and never looked back. Ponca City led 38-13 at the half and although Harrah picked up 20 points in the third quarter ;ed 56-33 at the end. Harrah was scoreless during the first seven plus minutes of the first period.

The Wildcats employed stifling defense throughout the first half.

Grant Dye led the Wildcats with 22 points. Also in double figures were Anthony Gazaway with 14, Marshawn Webb with 12 and Stevie Faulkner with 10.

The Wildcats had a closer game with Lawton Eisenhower but were able to finish strong to pick up the 59-50 win.

Four finished in double figures. Dye and Collin Crandall each had 15 points, Webb had 14 and Faulkner had 11.

“I would first like to say that all of these young men played a part in this trophy,” Coach Ivan McFarlin said about winning the consolation championship. The young guys got a tast of varsity ball and did very well. The juniors and seniors played great and I love them for all their effort and playing the Wildcat Way. This weekend is for David Kincaid and we, both boys and girls, wanted to play very hard. Thanks to all the parents for their commitment to this basketball program. Thank you!”

Going into Tuesday’s game at Putnam City the Wildcats are 2-1.