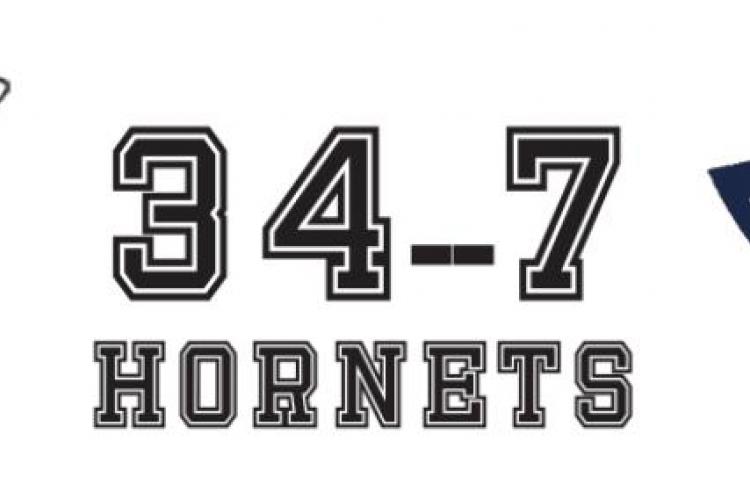 Friday’s game between Ponca City and Booker T. Washington was expected to be a defensive battle. That expectation held for the first half, which ended with the two teams tied at 7-7. But nothing went Ponca City’s way in the second half and Booker T. went home with a 34-7 victory.

The final score wasn’t an indication of the quality of play during most of the game.

The Wildcats’ defense was at the top of its game early in the contest, as it didn’t allow a first down on Booker T.’s first two possessions. On the first Hornet possession, Ponca City allowed only two yards on the first three plays and on the second possession, it allowed only four yards on three plays. Meanwhile the Wildcats did get two first downs on their opening possession as Cameron Jackson and Blake Bristow were able to get enough yardage to move the chains twice.

The first quarter ended with the score tied 0-0. With 8:52 left in the half, the Hornets put the first points on the scoreboard when quarterback Lathan Boone hit Jordan Drew on a 35-yard touchdown pass. Jackson March’s kick gave BTW a 7-0 lead. Ponca City responded right away going 69 yards on five plays for the game tying scores. Jackson had runs of two, 14 and 24 yards and Bristow ran the final yards for a 29-yard touchdown. Spencer Ball’s kick made it 7-7 with 7:19 left in the half.

After forcing Booker T. to punt after three plays, the Wildcats started what looked be a promising drive. Starting at their own 38 yard line, moved deep into Hornet territory. The big play in the drive was a 25-yard pass from Grant Harmon to receiver Triston Cunningham. But the Booker T. defense tightened and Ponca City turned the ball over on downs with 1:21 left in the half. The Hornets were forced to punt with 26 seconds before intermission and the half ended with the score tied 7-7.

In the second half, the tough Booker T. defense came out with a new intensity and bottled up Ponca City’s offensive efforts. After three consecutive running plays were stuffed for losses, the Wildcats gave up an interception and Hornet Ethan Grogan took the ball into the end zone on a 35-yard return. March’s kick gave his team a 14-7 advantage. The remainder of the third quarter was still pretty evenly played and the period ended at 14-7.

It wasn’t until there was 5:37 left in the game that Booker T. scored what appeared to be the touchdown to put things out of Ponca City’s grasp. Isaac Covington ran through the Wildcat defense for a 25-yard scoring play. March’s kick made the score 21-7. After Ponca City went three and out and punted, Jaiden Carroll ran 68 yards on the first play for a touchdown at 3:39 on the clock. The kick put the score at 28-7. On its next possession, a Wildcat fumble was picked up by Hornet Jonathan Ingram and returned 50 yards for a touchdown. March missed the point after to leave the score at 34-7 with only 12 seconds left in the game.

The loss drops Ponca City’s record to 3-4 overall and 2-3 in district play. With the Oklahoma Secondary School Activities Association announcement earlier this week that all schools could opt into the postseason, it appears that the Wildcats will have a playoffs opportunity. Booker T.’s record is 6-2 and 4-1 in district play.

Ponca City is scheduled to travel to No. 1 ranked Bixby next week.