Review: ‘Clarice’ is more CBS procedural than ‘Silence of the Lambs.’ That’s not a bad thing 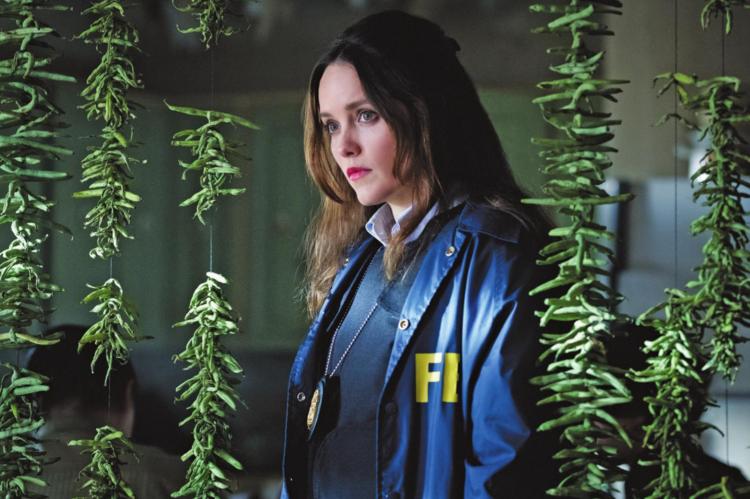 CBS, your one-stop shop for meat-and-potatoes television, has added another title to its roster of procedural reboots and revivals — though with “Clarice,” which premiered Thursday, it looks outside its own vault to create a sequel to “The Silence of the Lambs.” Alongside the network’s retooled “The Equalizer,” with Queen Latifah in the title role, it makes a minitrendlet of new female-led network crime shows, which is … not nothing.

Created by Jenny Lumet (“Rachel Getting Married”) and Alex Kurtzman (the 21st century “Star Trek” TV franchise), “Clarice” is set in 1993, a year after the events in “The Silence of the Lambs.” FBI agent Clarice Starling (Rebecca Breeds) is reckoning, in her buttoned-up West Virginian way, with trauma and celebrity, processing data in a basement room while she puts up with mandated therapy from a psychiatrist neither she nor we like at all.

And then the long arm of former Sen. Ruth Martin (Jayne Atkinson) — whose still-suffering daughter Catherine (Marnee Carpenter) Clarice saved from “Lambs” psycho killer Buffalo Bill, with the teasing help of that old cannibal Hannibal Lecter — now the attorney general of the United States, reaches into this unpromising situation and deposits Clarice in a new “violent crimes task force” she’s got going, much to the displeasure of its leader, Paul Krendler (Michael Cudlitz).

“He hasn’t forgotten how you showed him up when you were both chasing Bill,” Martin says to Clarice, “but he’s a hell of an investigator and a good lawyer,” adding that her fellow agents “hate you because they can’t understand what you’ve been through.”

“Esquivel’s our Army sniper guy, Tripathi’s our library, Clark’s our lie detector,” says Krendler, introducing the team, played by Lucca De Oliveira, Kal Penn and Nick Sandow, respectively. They might not exactly hate her, but they are less than welcoming (and can’t understand what she’s been through). They share the suspicion that Clarice, who was only a trainee in “Silence of the Lambs,” might be too big for her britches, although she herself points out that, as far as catching serial killers goes, “I can’t have a reputation. I’ve only done it once.”

An odd division of intellectual property forbids any mention of Lecter, which leaves less of a hole than you might imagine. I get that they’re popular with audiences, but, really, serial killers are the most tedious of criminals, which is why they are always being dressed up as brilliant mad geniuses with fancy signatures and significant backstories. They have a practical use, to be sure — Stop Them Before They Kill Again — but apart from the specific horrible things writers think up for them to do, or a weirdly original performance, one is much like another; crazy is lazy. Jonathan Demme’s “Lambs” won all the big Oscars in 1992 and Bryan Fuller’s baroque but character-rich “Hannibal” deserves its cult, but if I’m going to watch a Demme movie again it’s going to be “Melvin and Howard,” and if I want a hit of Fuller I’ll pop “Wonderfalls” or “Pushing Daisies” in the machine. Anyway, it’s not like there aren’t enough Hannibal-related projects: four novels, five movies and a television series. He’s out there if you want him, along with sundry other pop cultural serial killers. You can look them up.

How is “Clarice”? It’s a mix of good news and bad news, but the good news is the bad news gets better. To begin, it becomes clear before long that this will not be a show about hunting serial killers; there is a long arc involving a conspiracy and some strictly episodic business as well.

As is true of most cop shows, the crimes are practically beside the point; what matters are the crimestoppers and how they’re doing as individuals and as a team. All television is about family, at bottom, and viewers generally like these families to be basically functional, underneath whatever passive and aggressive aggression they are required to enact. Early on, “Clarice” forgets that; Breeds has a lot to do, but Cudlitz, so droll in the late lamented “The Kids Are Alright,” is stuck delivering a narrow assortment of stern warnings and disgusted looks, and among the rest of the team, there is barely enough personality to scrape together even a single character.

And then, in the fourth episode — I have seen five — the show starts to wake up, as if someone realized that there was a pie sitting in an oven that hadn’t been turned on. Just learning that Clark’s first name is Murray expands his character by half. People emerge from behind their labels. Conversations are had, jokes are made, even Krendler gets a normal person’s line or two (“You gonna eat that?”), and mutual support shyly rears its head. As much as Clarice might be upbraided for impetuousness and disobeying an order or two, they are all rebels in their way. Whether this was a plan from the beginning or the dawning realization that the show would have to warm up to stay alive, it’s an improvement.

There is also some effort to be relevant in larger and smaller ways. Investigators under pressure to produce a quick result, even a wrong one, to satisfy the boss and calm the population, is a crime story trope, but it also reflects the last administration’s COVID-19 response. One episode involves “a heavily armed secessionist militia who want to form their own state within Tennessee.” And in a scene in which Martin is up before some Congressional committee, she responds to a snarky remark about sympathy by noting, “Sympathy and empathy for Americans under our protection seems to be in short supply of late.” That is not a line you put in your 1993-set drama without wanting the viewer to think of 2021. And Clarice’s friend, roommate and fellow agent Devyn Tyler (Ardelia Mapp), who is Black and being held back, opens questions of institutional racism within the FBI. “I don’t solve cases,” she says, about to move some papers from here to there. “I carry them.”

There are chase scenes, searching in dark scary places scenes, scenes in which a person is holding a gun on another person, scenes in which bad guys try to psych out Clarice, and scenes in which Clarice psychs out the bad guys. The cast is universally good; it’s a pro job. Like Jodie Foster before her, Breeds is small of stature (there is a little joke about not having FBI jackets in her size, which is also meant to remind us that she is the only woman in a boys club) and puts on a West Virginia accent (her own is Australian), but she isn’t trying to evoke the prior performance.

Though the production itself starts off showy and uptight — we get flash bulbs making a sound like a steel door shutting, slo-mo, shallow focus and extreme close-ups, as fragments of Clarice’s upsetting backstory flip into view, like a creepy perfume commercial — it gets less so. That is to say, the show seems on its way to becoming a standard CBS procedural — a hang with mystery attached — and though some might suggest that any “Lambs”-related series should shoot for something deep or elevated, I would say that the more modest, mainstream way is the one to go.

When: 10 p.m. ET Thursday Rating: TV-14-LV (may be unsuitable for children under the age of 14 with advisories for coarse language and violence)