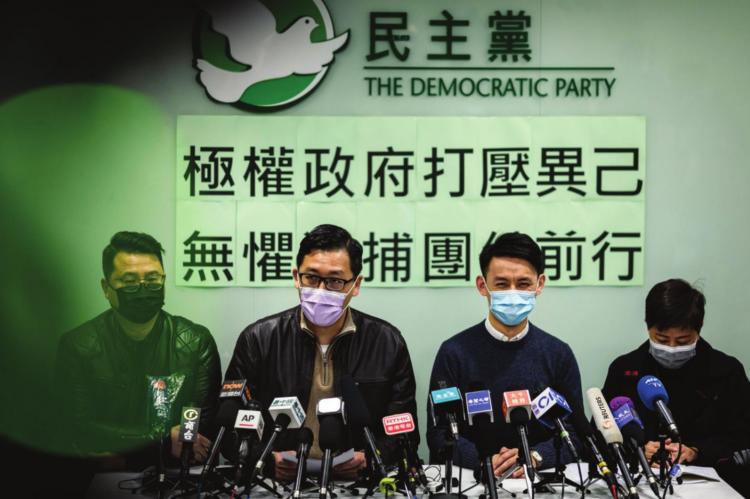 Hong Kong police have not yet charged any of the more than 50 democracy advocates arrested this week under controversial national security legislation, but did seize their passports and travel documents, according to local broadcaster RTHK.

All but three of the 55 activists and former politicians arrested on Wednesday have been released on bail, Radio Television Hong Kong reported, except for two activists who were already in jail on other charges and another who was remanded for not surrendering a British travel document.

“To democratic activists, this is the most effective way to bar them from seeking asylum,” said Fernando Cheung, a Hong Kong opposition politician who resigned his seat in protest alongside other pro-democracy lawmakers in November. “I think they will press charges after they have sorted out the evidence they gathered via the sweeping search warrants on the day of the arrests.”

The Hong Kong Police Force did not immediately respond to a request on how many activists have been granted bail or whether travel documents were seized.

The police may have allowed the activists to go free on bail to avoid fueling international criticism of the law, according to Ivan Choy, a senior politics lecturer at the Chinese University of Hong Kong. Government prosecutors successfully fought to have pro-democracy activist and media tycoon Jimmy Lai kept in jail ahead of his trial under the national security law but ended up generating negative international attention, he added.

“If you do that for more than 50 democrats, it would have a serious impact on society and in the international community,” Choy said. “Many voices in society would have criticized the government –- that you’re trying to arrest them and eliminate the democrats even though cases haven’t been tried by the courts.”

The mass arrests, which U.S. Secretary of State Michael Pompeo called an “outrage, and a reminder of the Chinese Communist Party’s contempt for its own people and the rule of law,” involved more than 1,000 police officers deployed to detain many of the city’s most prominent remaining activists and opposition politicians. The activists were arrested

The activists were arrested on suspicion of “subversion” for their roles in helping organize a democratic primary contest over the summer that involved more than 600,000 voters.

Police allege the primary, as well as plans to use a provision in the city’s miniconstitution to vote down the budget and trigger the Hong Kong chief executive’s resignation, were in fact an illegal attempt to “paralyze” the city’s government. The election was eventually postponed by a full year, with the government citing the coronavirus. Chinese and Hong Kong

Chinese and Hong Kong officials had previously warned the primary could violate the national security law, which bars subversion, secession, terrorism and foreign collusion. The law has been condemned by foreign governments who say it’s eroding the city’s freedoms, while Chinese officials defend it as necessary to restore stability after sometimes-violent unrest in 2019. United Nations Human

United Nations Human Rights Office spokeswoman Liz Throssell said the agency is “deeply concerned” about the events in Hong Kong this week. “These latest arrests indicate that –- as had been feared –- the offense of subversion under the National Security Law is indeed being used to detain individuals for exercising legitimate rights to participate in political and public life,” she said in a statement.