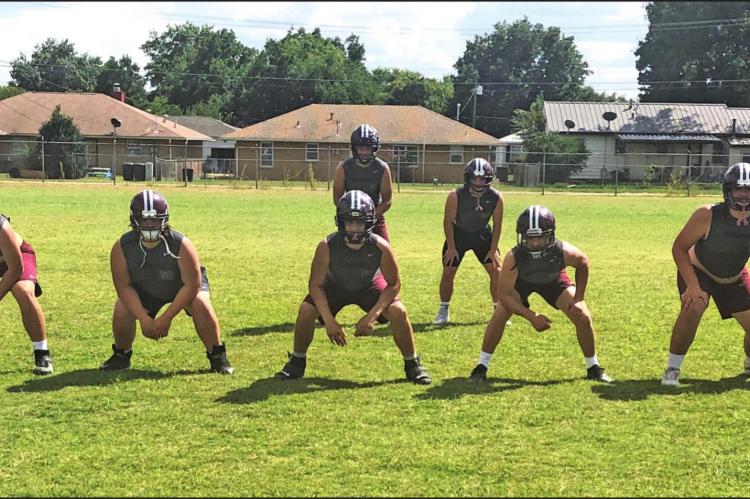 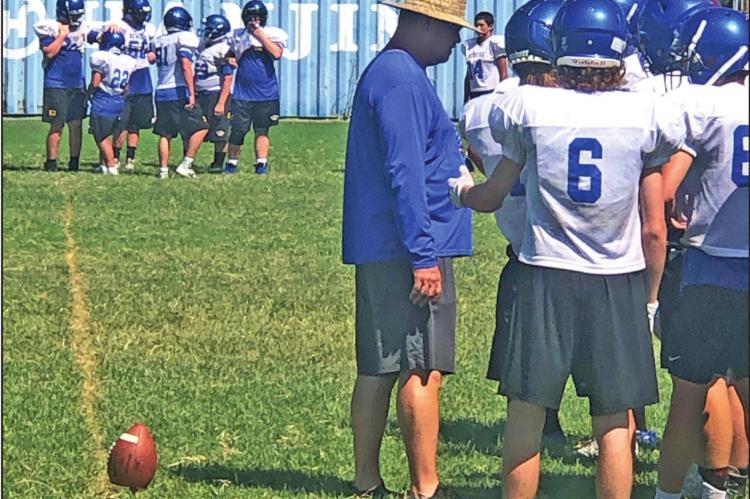 Kay County rivals Newkirk and Blackwell have competed in football for a number of years. This year the contest between the two will count in district standings for the first time as Blackwell has moved from Class 3A to 2A, the class that Newkirk has occupied for a long time. Both teams are expecting improved seasons this year.

Newkirk has a new head coach this season--Eddy Scott has replaced Graham Snelding, who has moved on to a job in Nowata. Scott is no stranger to the area having served at Woodland before taking a year off from coaching. He said he likes what he sees in his new position as Tiger mentor.

“We have talent,” he said. “We just have to decide where to put it. We need to get people in the right spots to be successful.”

The Tigers had a young team and played a lot of freshmen a year ago while struggling to a 2-8 season. At the same time, there are a number of departed seniors that need to be replaced. One thing that Scott noted was that a couple of players are competing for the starting quarterback position. Those two are senior Koy Moman and sophomore Clayton Bergman.

As is true with most teams, Newkirk has earning a spot in the playoffs as its goal. Looking at the other teams in the district, Scott believes the postseason is a realistic goal.

“It all depends on how things go,” he said. “Chisholm, Perry and Blackwell all will have pretty decent teams. Chisholm, as always, is the team to beat. Everybody else will be competing for second, third and fourth.”

Since taking over the Newkirk reins during the summer, Scott has seen some encouraging signs. One is that he has 46 players, an increase from past years. Another is the work ethic of his team.

“I am proud of the kids effort right now,” Scott said. “I can’t complain about their effort. Every day they are here and working hard. That’s all you can ask for. Our conditioning is much better. Our job is to get everyone on the same page and to get our conditioning where it needs to be.”

Blackwell Coach Rick Lang is celebrating his team’s move from Class 3A to 2A. In 3A, the Maroons annually had to face such opponents as Heritage Hall, John Marshall and Kingfisher.

“Those teams were consistently in the Top 5 in Class 3A,” Lang said. “In Class 2A we will play teams like Alva, Perry, Newkirk, Luther and Chisholm--schools that we are accustomed to playing in other sports. I am excited. We are where we need to be. Being in Class 2A gives our kids a shot at the playoffs. We have an opportunity.” While having lost six seniors off of last year’s squad, Lang likes the team he has returning.

“We have a good group of seniors. We have had players step up through the summer,” Lang said. “We have seven or eight players who played quite a bit. We are looking for consistency.”

Taking over at quarterback in Blackwell’s shotgun-oriented offense will be Worthy Shepherd. In the Blackwell offense the quarterback is asked to run as well as pass.

“He is one of the most athletic kids,” Lang said. “He has good feet and is smart.”

Tanner Botts, a threeyear starter, will be the slot receiver. “He has good hands and is one of the best route runners. We expect him to make big plays for us,” Lang said.

Junior Matthew Davis and senior Riley Fleshman return to anchor the offensive line. Christian Mora had a good scrimmage against Woodland last week and solidified his position as tailback. He also will play middle linebacker on defense.

Another starter on offense will be receiver Trevor Goodenough, of whom Lang says is fast, runs routes well and is a player you want to “get him the ball a lot.”

The Maroons will employ a 4-3 defense in which Lang says “We try to fly around and utilize our skill.” Most of the Maroon starters are expected to play both offense and defense. The top defensive players include Mora at middle linebacker, senior Hunter Young at another linebacker and Matthew Davis at defensive end.