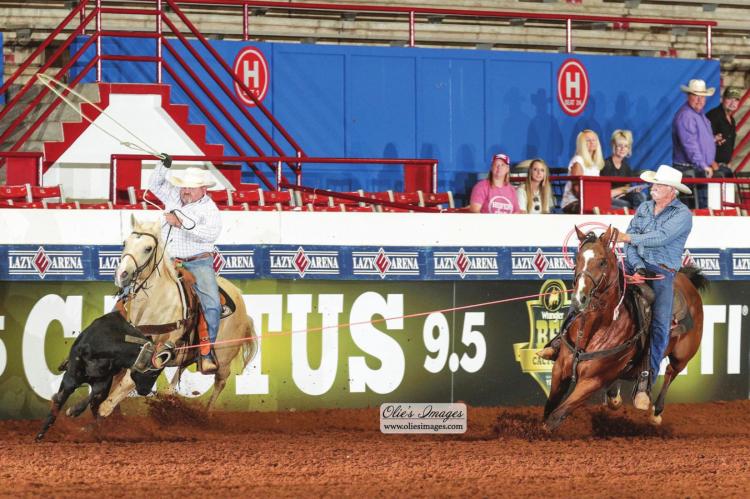 GUTHRIE — Because Wrangler BFI Week presented by Yeti had to be abruptly moved from Nevada to Oklahoma in order to happen in 2020, organizers decided to let the books stay open.

Anyone could walk up and enter the eight amateur ropings held as part of BFI Week, anchored by the 43rd Annual Bob Feist Invitational for professionals. It paid off for a pair of Texans on June 23. Ricky Oliver didn’t know Russ Cook was in Guthrie until he happened to bump into him in the Lazy E Arena about an hour before the 9.5 Over 40 roping. They decided to enter the event, now in its second year as part of the BFI Week roster, having arrived in Guthrie to rope in the brand-new 10.5 Over 40 with other partners.

“We’ve roped together off and on for some 15 years,” said Oliver.

The team jumped out and won the first round before taking a four-second cushion into the short round – despite a leg penalty! A smooth final run gave them the $50,000 win by four seconds.

“I don’t get too nervous,” said Cook, whose previous biggest single paycheck was $16,000. “I try to get out good and catch, then look at the steer’s eye; just pick his eye up and move out of there.”

The win felt good to Cook, who just 14 months ago was bucked off and broke nine ribs, a collarbone and his foot. The rancher and trucking company owner from Magnolia is known for riding nice head horses. He has about six at the moment. In this roping he was on Casino, a 10-year-old High Brow Cat/Doc’s Hickory gelding he bought from Neal Wood. “I never drew a bad steer in

“I never drew a bad steer in either roping and the barrier was perfect,” said Cook, who spends his winters jackpotting around Phoenix. “This is probably the nicest arena in the world.”

Oliver, an electrical con tractor from Huntsville, rode his 18-year-old grade gelding, Yella, that he purchased from John Philipp.

“I was just thinking, ‘Take your first good throw,’” said Oliver, who also scored his single biggest paycheck ever. “I think I’ll spend it wisely… roping. Actually, I was looking at buying a new horse, and I can buy it now. Winning something at the BFI is right up there with winning something at Las Vegas. We only had to beat 91 teams to win $50,000!”

Cook once entered the actual BFI, years ago, and for years he traveled the 30 hours to Reno from his home in Magnolia, Texas, for the June event. But he’d skipped the past couple of editions, and Oliver hasn’t been to Reno in at least a dozen years. Both ropers would love to see BFI Week stay in middle America.

The reason the event was able to relocate to the Lazy E was in part due to the accommodation of Lazy E Ranch owner – and team roper – Gary McKinney, who also made the 9.5 Over 40 short round with ProRodeo Hall of Fame bullfighter Rob Smets. They had tough luck, but the roping paid every team that caught three to make the short round, so the 9.5 Over 40 paid 17 places in the average.

Wrangler BFI Week wraps up June 24 with the Charlie 1 Horse All-Girl Challenge. All events are live-streamed on www.WranglerNetwork.com.