Wildcats have short week to prepare

By David Miller David@poncacitynews.com
Time to read
3 minutes
Print
a- a+
Published 1 week ago
Last updated 1 week ago
Read so far
In-page image(s) 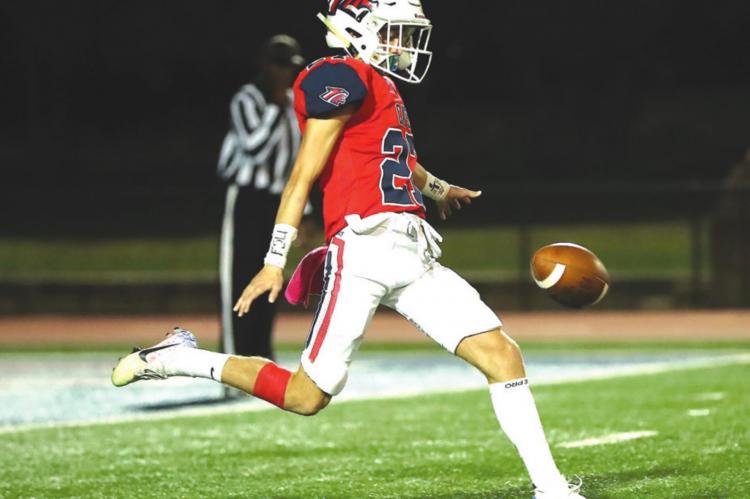 It is a short week for the Ponca City Wildcats in terms of their preparation for this week’s game against the Bartlesville Bruins. Because of Fall Break, the Wildcats are scheduled to play in Bartlesville on Thursday night.

Coach Scott Harmon said that last week’s 21-7 victory over Put nam City West helped give his team motivation to get ready to take on the Bruins. But the Wildcats’ know they will have to be at the top of their game. Bartlesville also won last week and its victory was a resounding 52-24 pasting of Muskogee.

Harmon noted that his team will have to find a way to slow down the Bruin rushing attack which was going great guns against Muskogee. “They have a good quarterback and tough running back,” he said.

The two accounted for 360 yards rushing against Muskogee. Senior tailback Dylan McCoy had 226 yards on 16 carries, while quarterback Paxton Bradford carried the ball 21 times for 134 yards. The Wildcats remember McCoy as having been a handful in last year’s game which Bartlesville won. Overall, the Bartlesville running game accounted for 450 yards.

The Bruins also had some good defensive performances, including 15 tackles, three sacks and two fumble recoveries by linebacker Braeden Winters, who also saw some duty at running back. Freshman Cooper Woods was recorded with a pair of sacks.

Ponca City’s defensive unit will have the task of slowing down the Bruin running attack. So far, the Wildcat defense has acqutted themselves quite well against the opposition. Meanwhile, Coach Harmon has been pleased with the growth of his offensive players, who have shown improvement each week. Ponca City has a 2-3 overall record and is 1-2 in District 6AII- 2. Bartlesville has a 2-4 overall mark and are also 1-2 in district play. The Bruins opened with a 34-10 victory over Claremore and then before last week’s win over Muskogee, lost four games in a row--48-21 to Sapulpa, 34-30 to Collinsville; 74-7 to Bixby and 34-7 to Tulsa Washington.

At stack will be the annual Conoco-Phillips trophy which goes to the winner of the Bartlesville-Ponca City game each year.

In other District 6AII-2 games, Bixby will be at Sand Springs, Muskogee will be at Choctaw and Booker T. Washington will be at Putnam City West. All games are on Thursday.

In games involving area teams, on Thursday Oklahoma Christian Academy will be at Tonkawa, Newkirk will be at Blackwell, Chelsea will be at Pawnee, Bluejacket will be at Deer Creek-Lamont and Woodland will be at Chouteau. Friday, Morrison will travel to Hominy.

The Tonkawa Buccaneers will look to improve their record to 5-1. They have posted wins over Newkirk, Blackwell, Crescent and Watonga, with the only blemish on their record being a 39-26 loss to Perry. Oklahoma Christian Academy is 1-5 with an 18-10 win over Hinton in the middle of losses to Sayre, Merritt, Stratford, Cashion and Oklahoma Bible.

These two Kay County teams have been rivals for a few years, but for the first time their game will count in district standings. Blackwell is 3-3 having beaten the Oklahoma City Patriots, Oklahoma Bible and Hennessey. Losses have been to Tonkawa, Luther and Perry. Newkirk is looking for its first win, with losses to Tonkawa, Woodland, Oklahoma Bible, Alva and Oklahoma Christian School.

The Pawnee Black Bears have proven themselves to be one of Class A’s premier teams. They have won five times since an opening game loss to Class 2A powerhouse Washington. Wins have come over Mooreland, Okemah, Hominy, Woodland and Tulsa NOAH. Last week’s game with NOAH was a wild one, with the Bears finally pulling out a 54-49 victory. Chelsea is 3-3 having beaten Porter and Nowata and Chouteau while losing to Commerce, Morrison and Caney Valley. The Green Dragons are 1-2 in district play.

1-2 in district play. BLUEJACKET AT DCLA

The Deer Creek-Lamont Eagles are in search of their first win. They have lost to Covington-Douglas, Medford, Wesleyan Christian and Timberlake in games that ended at halftime. Bluejacket has a 3-2 record which includes wins over Chetopa, Kan., Copan and South Coffeyville and losses to Cross Christian Academy and Claremore Christian.

The Woodland Cougars are coming off a big win last week over Morrison. They are 5-1 with the only loss being to Pawnee. Wins include victories over Oklahoma Union, Newkirk, Mooreland, Caney Valley and Morrison. Chouteau has struggled to an 0-5 mark losing to Quapaw, Warner, Chelsea, Westville and Stroud.

MORRISON AT HOMINY Morrison is regrouping after

Morrison is regrouping after last week’s 40-36 loss to Woodland. The Wildcats are 3-2 overall and 1-1 in district play. Their wins have been over Kiefer, Porter and Chelsea, with losses to Woodland and Oklahoma Christian School. Hominy comes to the game with 3-3 mark with victories over Tulsa NOAH, Ponca City junior varsity and Caney Valley and losses to three very good teams -- Cleveland, Pawhuska and Pawnee. This game will be on Friday.