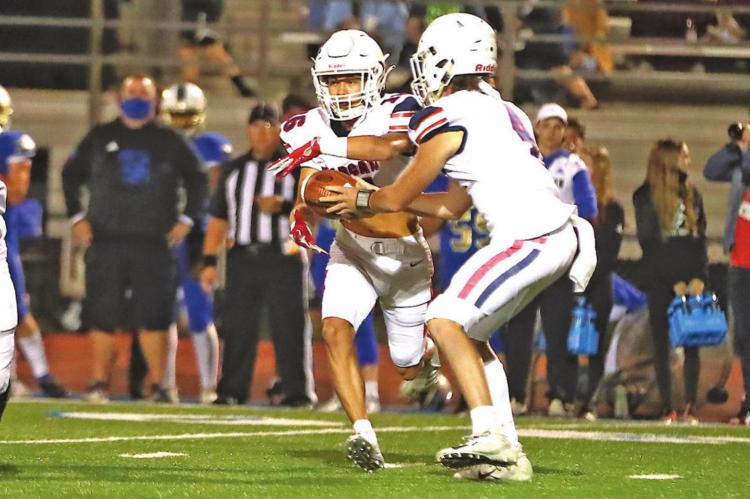 Coming off what their coach thinks was their best performance of the season, the Ponca City Wildcats are set to do battle Friday with the Putnam City West Patriots.

Friday’s game is scheduled at 7 p.m. in Sullins Stadium and it will be the annual Po-Hi Homecoming football game.

“I felt it was the best game of the year for us,” Wildcat Coach Scott Harmon said. “Choctaw was a very good team, I think they came in ranked No. 5 or 6. Obviously, we wanted to win, but there were a lot of positives to take away from the game.”

One positive was that the Wildcat defense continued to play well. It was able to hold the explosive Choctaw offensive unit to three touchdowns, the same total that Choctaw scored in its victory over a pretty good Booker T. Washington team the week before. The Wildcats held Choctaw scoreless in the second half.

Another positive was that the Ponca City offense also made some strides in the right direction. At one time Ponca City led 14-6. Quarterback Nate Harbeson showed signs he has settled in to the quarterback position, which had been “quarterback by committee” after the injury to sophomore quarterback Grant Harmon in Game 2.

“Nate is getting comfortable back there,” Harmon said. “He was very efficient in passing, 7 for 11. It has been a couple of years since he has been on the field.”

But that was last week. The Wildcats’ attention is now focused on Friday’s opponent--Putnam West. The Patriots are 0-3, having lost to Guthrie 43-20, Putnam City 28-6 and Putnam City North 47-0. Two games were cancelled because of a Putnam City district shutdown of athletic competition.

After looking at West, Coach Harmon notes that the Patriots have a pretty good ground game.

“They have a good running back, the best we’ve seen since the Enid game.. He has good skill at eluding tackles. I think their offensive unit is probably better than their defense. Even so, the defensive is very aggressive. We are going to have to hold our blocks. The game will be a challenge.”

Ponca City is looking for its second win of the season. The Wildcats were 1-1 in non district competition with a 19-17 loss to Enid and a 23-22 win over Tulsa McLain. In district play Ponca City is 0-2 with a 35-10 loss to Sand Springs and last week’s defeat at the hands of Choctaw.

In other district games Friday, Bartlesville will be at Muskogee, Sand Springs at Booker T. Washington and Choctaw will be at Bixby.

In games involving area teams, Tonkawa will be at Watonga, Blackwell at Hennessey, Newkirk at Oklaho-ma Christian School, Morrison at Woodland, Tulsa NOAH at Pawnee and Deer Creek-Lamont at Timberlake.

The Blackwell Maroons won their first two games, over the Oklahoma City Patriots and Oklahoma Bible, but since have dropped three straight--Tonkawa, Luther and Perry. They are hoping for a victory over Hennessey to break the losing string. Hennessey has played only three times, losing to Cres cent and Hinton and winning over Crooked Oak. The Eagles’ game with Newkirk last week was cancelled.

It has been rough going for Newkirk in the first half of the season. The Tigers are 0-4 with losses to Tonkawa, Woodland, Oklahoma Bible and Alva. Last week’s sched uled game with Hennessey was cancelled. Their opponent this week is 4-0 with wins over Christian Heritage, Morrison, Chisholm and Alva.

The Woodland Cougars won their first four games, topping Oklahoma Union, Newkirk, Mooreland and Caney Valley. Last week they dropped their first game, a 28-8 loss to a very tough Pawnee team. The Cougars run into another tough team this week in Morrison, which is 3-1. The Wildcats lost their first game to Oklahoma Christian school, but since then have defeated Kiefer, Porter and Chelsea.

Like Morrison, Pawnee lost its opener but has rebounded with victories. The Black Bears’ loss was to Washington, which has been followed with four wins--over Mooreland, Okemah, Hominy and Woodland. NOAH is an independent home school team that has built up a 4-2 record. The first two games were losses to Hominy and Metro Christian. But since then NOAH has beaten Oklahoma Union, Okmulgee, North Rock Creek and DASCHE of Texas.

The Deer Creek-Lamont Eagles are off to a rough start having lost to Covington-Douglas, Medford and Wesleyan Christian. None of the three were close. Timberlake is one of Class C’s better teams with victories over Covington-Douglas, Ringwood, Waukomis, South Coffeyville and Welch. The Tigers are averaging 61 points a game, which is a bad sign for DCLA.