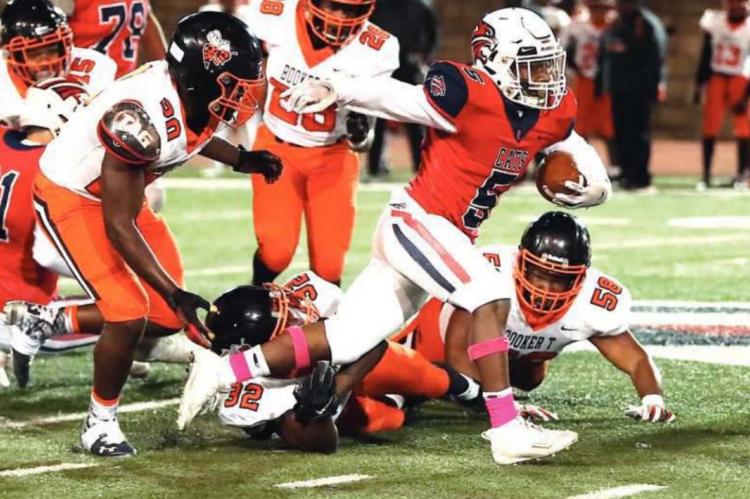 Facing what undoubtedly is their biggest challenge of the year, the Ponca City Wildcats are preparing for Friday’s game against the Bixby Spartans in Bixby.

It will be the final regular season game for the Wildcats since they received word earlier this week that the Nov. 6 game with Muskogee has been called off due to COVID-19 concerns in Muskogee. The game with Muskogee was scheduled for Sullins Stadium. The cancellation highlights the wisdom of holding Senior Night, the game when senior players are recognized, at the first home game this year. Muskogee’s season ended two weeks ago as the Roughers also cancelled contests with Putnam City West, Bixby and Booker T. Washington.

The Wildcats have indicated they plan on participating in the Class 6AII playoffs which was opened up to all interested teams last week by the Oklahoma Secondary School Activities Association.

Friday’s opponent, Bixby, is ranked No. 1 in Class 6AII and some observers believe the Spartans might very well be the best team, regardless of classification, in the state. They have already defeated Class 6A powerhouses Tulsa Union and Jenks in nondistrict contests. Bixby has won the 6AII state title five out of the past six years.

Coach Scott Harmon has said all along that Bixby is the team on the Wildcats’ schedule that presents the toughest challenge.

The Spartans have a quarterback in Mason Williams that has the savvy of a player who has been at his position for several years. Williams has never lost a game at his position as Bixby is sitting on a 31-game winning streak. Junior Braylin Presley is an explosive running back who has the skills to score every time he touches the ball. Presley has started since his freshman season. in last season’s game with Bixby, Ponca City lost 49-3. Bixby finished with 396 yards on total offense while Ponca City was limited to 46 yards. Williams passed for 141 yards and three touchdowns while Presley rushed for 120 yards on nine carries and returned a punt for a touchdown.

Bixby has gotten good performances from the Hasz twins, Dylan and Luke, who are top-notch receivers. The Hasz brothers are just sophomores.

There has been off-the-field controversy surrounding this game. Ponca City radio station KPNC and and Oklahoma Association of Broadcasters took the Bixby school district to court over a $500 fee the district was wanting to charge for live-streaming the game. In a decision made Wednesday, the Tulsa County court ruled in favor of the Bixby district. The Bixby district had given KPNC permission to broadcast the game over radio.

Bixby has lost two games to COVID-19 so far this season. Games with Muskogee, last week, and Putnam City West, earlier in the year, were cancelled. Otherwise, the Spartans are 6-0 having defeated Union 34-0, Jenks 42-35, Bartlesville 74-7, Carl Albert 56-14, Choctaw 24-13 and Sand Springs 51-20. After Friday’s game the Spartans have one contest left, a game with Booker T. Washington, which should be for the district crown.

Ponca City will go to the game with a 3-4 overall record and a 2-3 mark in the district.

Other district games of interest include Bartlesville at Sand Springs and Choctaw at Putnam City West. The Booker T. Washington game with Muskogee has been postponed.

Area games of interest include Tonkawa at Cashion, Woodland at Chelsea, Pawnee at Chouteu (Monday), Alva at Blackwell, Chisholm at Newkirk and Welch at Deer Creek-Lamont. Morrison played at Caney Valley on Thursday night.

All eyes are looking at this game which features two highly ranked Class A teams going to battle. Cashion is ranked No. 2 or No. 3 in the classification, depending on which poll you take a look at. Tonkawa also has rankings in the Top 10. Cashion, which was the Class A state runnerup last year, is 8-0 with wins over Rejoice Christian, Perry, Minco, Thomas, Watonga, Oklahoma Christian Academy, Stillwater JV, and Oklahoma Bible. The closest of those was the Wildcats’ 13-point victory over the Stillwater JV. All others were by lopsided scores. Tonkawa, which won the state two years ago, is looking better each week. The Buccaneers have a 6-1 record with the only blemish a 39-26 loss to Perry on Sept. 11. Tonkawa’s wins have been over Newkirk, Blackwell, Crescent, Watonga, Oklahoma Christian Academy and Hinton.

The Woodland Cougars have regained some of the luster they had a decade ago as they have posted a 7-1 record and have a strong chance to finish second in their district. The only loss has come to No. 4 ranked Pawnee. Wins have been posted over Oklahoma Union, Newkirk, Mooreland, Caney Valley, Morrison, Chouteau and Hominy. This week’s opponent, Chelsea, has struggled some. The Green Dragons are 3-3 with wins over Porter, Nowata and Chouteau and losses to Commerce, Morrison and Caney Valley.

The Pawnee Black Bears have had a week off as their game with Morrison last week was cancelled due to COVID-19 concerns. The Bears carry a No. 4 ranking in Class A to this game as well as a 5-1 record. The one loss was to Class 2A power Washington in the opening game. Since then they have posted wins over Mooreland, Okemah, Hominy, Woodland and Tulsa NOAH. Chouteau is still searching for a win. The Wildcats are 0-8 with losses to Quapaw, Warner, Chelsea, Westville, Stroud, Woodland, Caney Valley and Hominy. This game will be played on Monday.

The Blackwell Maroons and Alva Goldbugs will lock up in a game that has been rated a toss-up by major news outlets in the state. Alva has a 2-6 record with wins over Fairview and Newkirk and losses to Kingfisher, Thomas, Oklahoma Christian School, Luther, Perry and Hennessey. Blackwell has a 4-4 record with wins over the Oklahoma City Patriots, Oklahoma Bible, Hennessey and Newkirk. Losses have been to Tonkawa, Luthers, Perry and Chisholm.

The Newkirk Tigers are hoping they can pick up their first win of the season Friday. To do so they need to defeat 2-6 Chisholm who has beaten Fairview and Blackwell while losing to Kingfisher, Perkins, Oklahoma Christian School, Luther, Perry and Hennessey. Newkirk is 0-7 with a game against Perry rounding out its schedule.

The Deer Creek-Lamont Eagles picked up their first win last week with an 80-34 pasting of South Coffeyville. Before that the 26 points they had scored the week before in a 60-26 loss to Bluejacket was the only time they had scored in double digits. Welch is 0-6 with losses to Wilson of Henryetta, Watts, Life Christian, Wesleyan Christian, Timberlake and Copan. The Eagles have a great opportunity to pick up another victory.