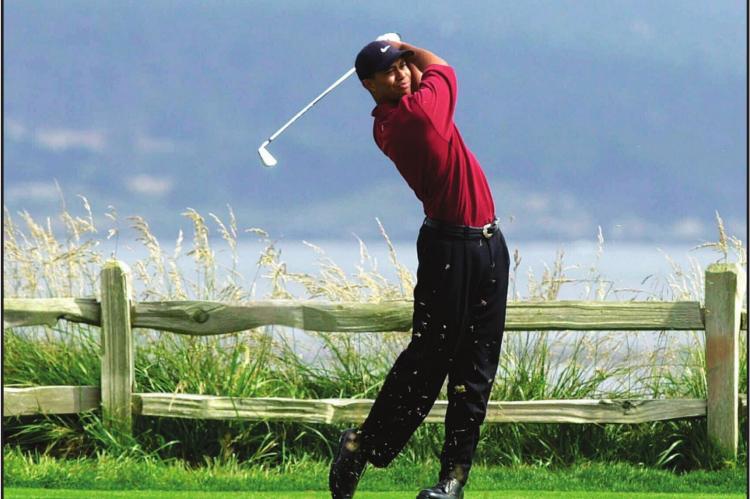 The timing turned out to be even better.

The one-hour special, which chronicles Woods winning all four majors in a span of 294 days, will be shown two hours after Woods is seen in live competition for the first time in three months.

“Tiger Slam” is scheduled to air on May 24 at 8 p.m. EDT, right after Woods and Peyton Manning face Phil Mickelson and Tom Brady in a charity exhibition for COVID-19 relief efforts.

The film originally was set to be shown on April 12, the Sunday night after the Masters. But then the new coronavirus put a stop to sports, and the Masters eventually was rescheduled for two weeks before Thanksgiving. Golf Channel decided to wait until the right moment.

It helps, too, that “Tiger Slam” will be shown one week after the conclusion of “The Last Dance” documentary on Michael Jordan and his championship runs with the Chicago Bulls.

For Woods, the one-hour special covers four tournaments — his 15-shot victory in the U.S. Open at Pebble Beach in 2000, his eight-shot victory in the British Open at St. Andrews to complete the career Grand Slam, his playoff victory over Bob May in the PGA Championship at Valhalla and his battle with Mickelson and David Duval to win the Masters.

Woods remains the only player to hold all four professional majors at the same time.

The film, with limited commercial interruption, is narrated by Emmy Award-winning actor Michael Kenneth Williams. It features insight from caddie Steve Williams and swing coach Butch Harmon, along with sports media personalities at the majors. Steve Williams talks about the time they nearly ran out of golf balls to finish the fogdelayed second round on Saturday morning because Woods was putting in his hotel and left three balls in his room.

Golf Films began in 2014 with the four-part series on Arnold Palmer, which was shown right after the Masters that year. It also has produced a three-part series on Jack Nicklaus and a two-part film on Ben Hogan.

Tiger Woods was 31 when he won the PGA Championship at Southern Hills during a scorching week in 2007. He will be 54 the next time the PGA returns to Tulsa, Oklahoma.

The PGA of America announced Tuesday that Southern Hills, which has hosted seven majors, will hold the 2030 PGA Championship. The PGA said three years ago the Perry Maxwell design was on the rotation for another PGA, and it was simply waiting for the year.

The PGA Tour has said only that the first four events upon its return at Colonial next month will not have fans. That means the Memorial — now scheduled as the sixth event (July 16-19) — is planning to have spectators.

Just not as many.

Dan Sullivan, the tournament director, says there will not be grandstands — Muirfield Village in Dublin, Ohio, didn’t need that many, anyway, because of the landscape — and beverages will be sold only in bottles.

Most interesting about his discussion last week with the Greater Columbus Sports Commission was the concept of chips inserted in badges to determine how fans are gathering.

“At any time we can know around the golf course how many people are collecting in a certain area,” he said. “We’re going to use that technology to make sure that we’re protecting everyone around us, protecting the folks that are inside those various venues and make sure that we’re monitoring effectively and producing a tournament that everyone can be comfortable with.”

The PGA Championship was supposed to be played this week at Harding Park in San Francisco, easy to overlook since this would have been only the second year of the championship moving to May. Its two networks are still going to fill the void with recaps of four PGA Championships on ESPN2 and full final rounds from two others on CBS Sports this weekend.

ESPN plans to show Justin Thomas winning in 2017 at Quail Hollow (noon EDT) and Rory McIlroy winning his second Wanamaker Trophy in 2014 at Valhalla (2:30 p.m. EDT), when it was a fourman race on the back nine that featured Phil Mickelson, Henrik Stenson and Rickie Fowler.

CBS has two of Tiger Woods’ most exciting runs in the PGA Championship on the weekend — one a win, the other a loss.

It starts Saturday at 2:30 p.m. EDT with Brooks Koepka holding off a strong rally by Woods at Bellerive in 2018. Woods shot a career-low 64 in a major. Koepka shot 66 and won by two with a record score of 264.

On Sunday at 3 p.m EDT is Woods’ 2000 victory at Valhalla, where he holed what he considers the biggest putt of his career, a 6-foot birdie to force a three-hole playoff against Bob May. Woods won for his third straight major, becoming the first player to win back-to-back at the PGA Championship in stroke play.