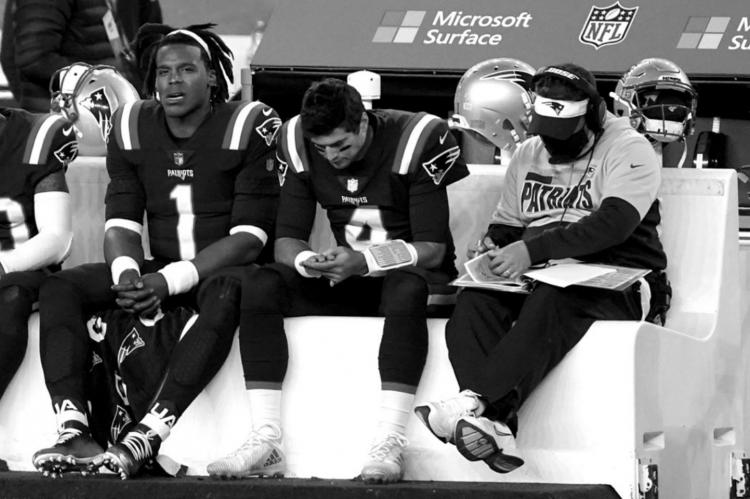 Cam Newton rattles off nicknames for teammates like he’s calling plays in the huddle.

Newton’s got one for just about everyone. Some clear, others covert, most comical.

“I’ve been a part of teams where, at times you feel like, even though you’re sharing or you’re locker roommates or you’re locker mates, that’s just your coworker,” Newton said Thursday. “And I’ve also been around teams that have been extremely close and guys have this family oriented bond and those teams usually last, and that’s what we’re trying to get to.”

Newton is one of three venerable quarterbacks — along with Tom Brady and Philip Rivers — who made high-profile moves during the NFL’s pandemic-altered offseason. The 43-year-old Brady took his six Super Bowl rings from New England to Tampa Bay. The 38-year-old Rivers left the Chargers after 16 seasons and joined Indianapolis. The 31-year-old Newton relocated from Charlotte to New England following an injuryplagued 2019.

It hasn’t been a totally smooth transition for any of them, although Brady and Rivers are playoff contenders at the halfway point of the season.

Newton, meanwhile, well, he summed up his season better than a Patriots fan sitting on a barstool in Brookline.

“This has been, as Bostonians would say, a wicked year,” Newton quipped.

Newton has 10 touchdowns (eight rushing, two passing) and eight turnovers in eight games. The Patriots (3-5) are averaging slightly more than 20 points, ranking 28th in the league and sitting in their lowest spot since quarterbacks Steve Grogan, Tom Hodson and Marc Wilson split starts in 1990.

They edged the winless New York Jets on Monday night to avoid the franchise’s first five-game skid since 1995.

“Losing is not acceptable in this locker room, in this county, in this state, this area, this region,” Newton said. “So Cameron Newton, you need to pick your expletive up. That’s what I’ve learned.”

In Newton’s defense, the talent around him makes his most lean years in Carolina seem stout. He’s got a revolving door at running back, no receivers with any touchdown receptions and not a single tight end with doubledigit catches.

With Godwin and Gronk healthy and Brown getting acclimated, the Buccaneers (6-3) should be a team to watch down the stretch in the NFC — even if they didn’t look the part last week. Their 38-3 home loss to South-leading New Orleans was the most lopsided in Brady’s 21-year career. “It’s a lot of positive yelling

“It’s a lot of positive yelling that he does,” left tackle Donovan Smith said. “It’s great to be able to have somebody who has been to the top, been to the Super Bowl and knows how to get there. You just kind of sit there and you trust him – how he manages the game and communication and everything.”

Rivers is coming off his most impressive victory with his new team, a 34-17 comeback at Tennessee on Thursday night that gave the Colts (6-3) their sixth win in eight games and put them atop the AFC South. Rivers played turnover-free football for the fourth time this season — all wins — and found success with a hurry-up offense.

“It just felt like we were dialed in and ready to go,” Rivers said. “This performance, from our team, doesn’t surprise any of us. … This was a big win, but we know there is a long way to go.”

Brady, Rivers and Newton all thought they were joining playoff-caliber teams. The Bucs were the NFL’s top passing team in 2019 with turnover-prone Jameis Winston at the helm. The Colts, who have one of the best pass-blocking lines in the league, were a playoff team in 2018 and probably would have been again last season had they just been better in close games.

And no one could blame Newton for jumping at a chance to play in New England, which has won the AFC East each of the last 11 years and been a perennial playoff contender since Brady and coach Bill Belichick’s second season together.

All three are considered short-term fixes at the NFL’s most important position.

Newton might be the least likely to stay put in 2021. Either way, the Patriots will always have his nicknames.

“Obviously COVID has kind of limited any type of team interactions outside of the stadium,” Newton said. “And normally we would have probably had gathers, but that has been halted all year.

“So, anytime you have the opportunity to talk to a teammate, be around a teammate, … you will always want to chat and talk and make the day go by faster, sort of speak. And that’s what it all comes down to.”