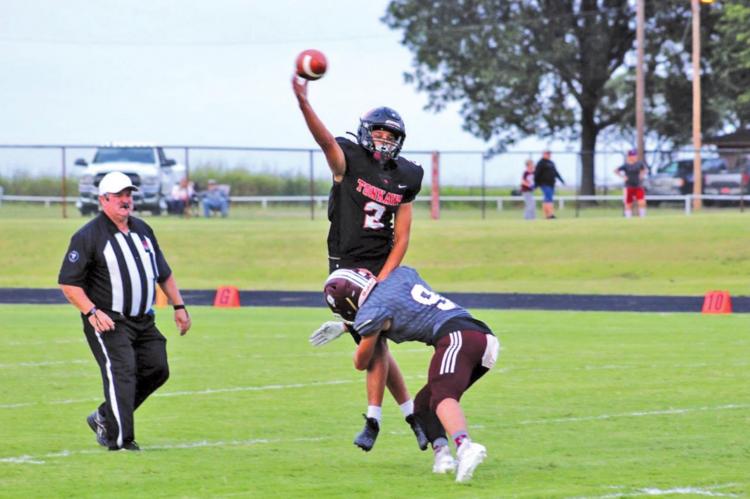 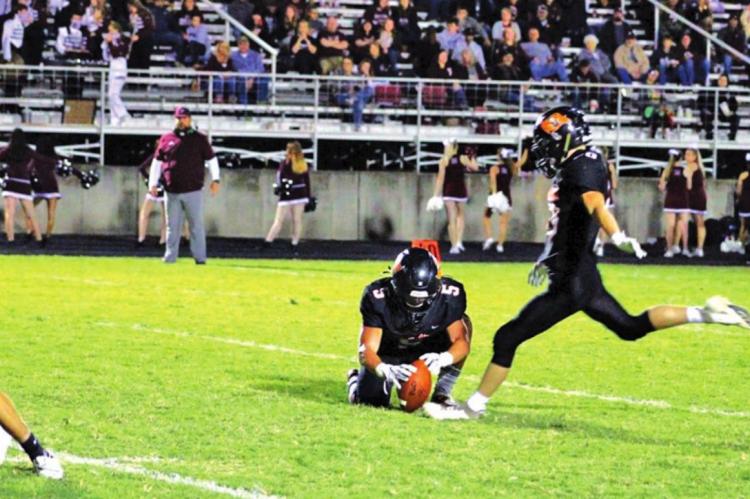 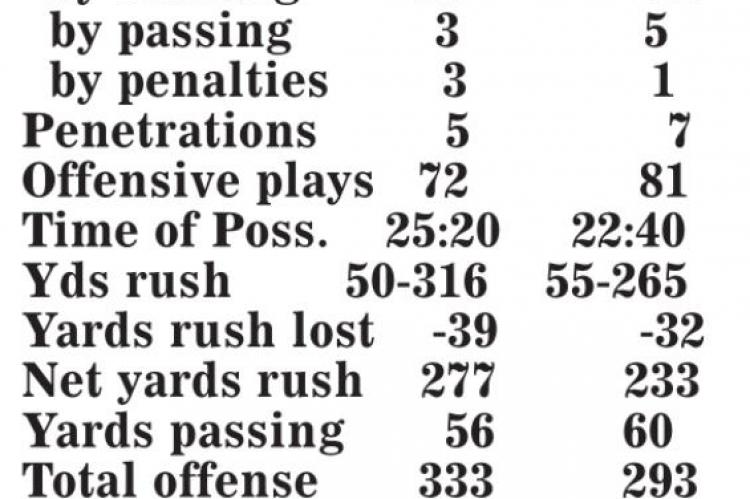 It was just too much to overcome and Tonkawa’s football Bucs fell 26-39 for the first time this season. It came vs. Class 2A Perry.

The only real break for Tonkawa came early in the second quarter when Clay Massey blocked a Perry punt and the Bucs scored from 23 yards out on a pass from Ryan Morgan to Jake Randall.

That put the Bucs up 12-7, the only time the hometown team would lead the entire evening.

Perry had drawn first blood scoring after they intercepted the Bucs on their second play from scrimmage and going 54 yards in 5 plays for an early 7-0 lead.

The Bucs fumbled on their next possession but managed to ward off the Maroons and took over at their own 15.Ten plays later Nathan Anderson caught a six yard pass from Morgan for the touchdown. The first PAT attempt by Carson Robinson was good, but a penalty moved the ball back and the second was short.

Tonkawa suffered penalties at critical stages of the ball game.

Soon after Massey’s heroics to set up the go-ahead TD for Tonkawa, Perry covered another fumble, but this time parlayed it into a 39-yard, six play drive for the go-ahead 14-12 touchdown.

After trading punts, Tonkawa got the ball back at the Perry 36. A holding penalty nullified a TD pass from Morgan to Robinson on third and four from the four. Robinson tried a 34 yard field goal with 16 seconds left on fourth down, but it was short.

That’s the way the first half ended.

On the first play from scrimmage in the third quarter, Perry socred on a 59 yards run and went up 20-12.

The Bucs came right back, driving 41 yards in seven plays after a Carson Robinson 37 yards kickoff return. The touchdown came on a two yard run by Tristan Burdick. On the two point conversion, Morgan lateraled to Burdick who tossed the ball to a wide open Noah Campbell. Burdick would finish the game with 280 yards on 39 carries and two touchdowns.

But that’s when the bottom fell out for Tonkawa.

A snap to Tonkawa’s punter sailed over his head and the Maroons scored from 10 yards out on first down. the very next play.

After trading possessions, Perry intercepted a Buc pass, running it 41 yards back for yet another TD. The PAT kick failed, but the Maroons were up 33-20.

Tonkawa would score one more time early in the fourth quarter on a 34-yard, 3 play drive set up by a 21 yard kickoff return by Robinson. Burdick scored from 23 yards out with 11:52 left in the game. The PAT kick was blocked. The Bucs still trailed 26-33.

But there were still over 8 minutes left in the game.

On its next possession, Tonkawa got a 24 yards kickoff return from Burdick setting the Bucs up at their own 44.

Ryan Morgan passed to Jake Randall for 14 yards and Burdick ran for 13 and 15 yards. But a holding penalty moved the Bucs back to their own 30. What would have been a first down at the Perry 14 was moved back. Two plays later Tonkawa fumbled the ball away for the final time.

Neither team could move the ball on the other the final five minutes of the ball game.

Noah Campbell led the defense with 13 tackles. Jake Morgan had 10, Clay Massey and Jaidyn Guzman 10 each.