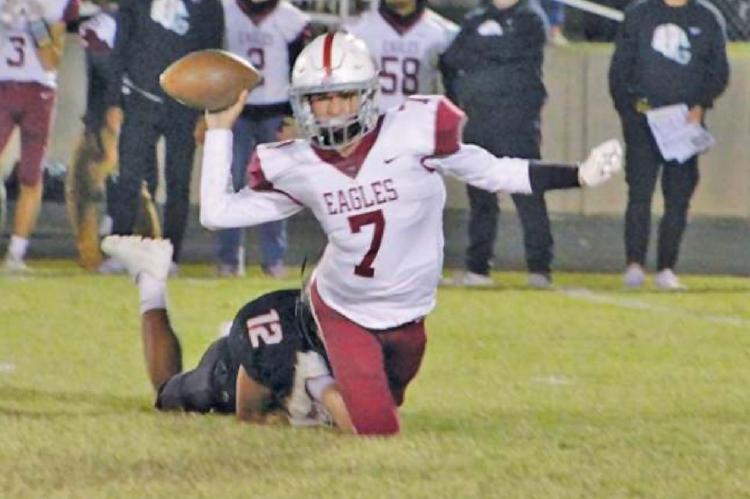 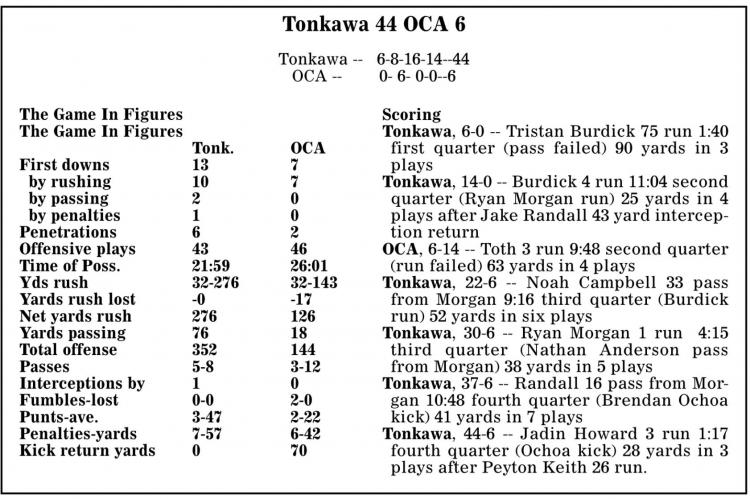 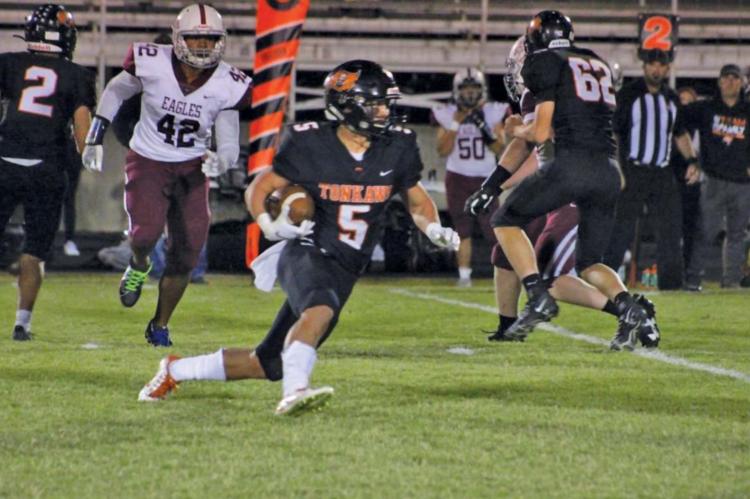 Tonkawa scored 30 unanswered points in the second half and coasted to a 44-6 District A-3 win over Oklahoma Christian Academy Thursday night.

But more importantly, it was how they did it.

With 9:48 left in the second quarter, the Fighting Eagles would score their lone touchdown of the evening. They had already taken the opening kickoff from their own 37 to the Buc 10 yard line. With first and goal from that point, they were turned back by tackles from Dante Mendoza, Fireshaker Davis, Nathan Anderson, Noah Campbell and Jaidyn Guzman.

From that time until the end of the ball game, nearly 34 minutes, OCA managed only one first down and rushed for only 13 yards on 17 carries.

After that heroic goalline stand, Tonkawa got two touchdowns on the board before the lone Eagle score of the game.

The first came on a 75 yard run by senior tailback Tristan Burdick. The drive covered 90 yards and took only three plays. Burdick left the game with 167 yards on 16 carries and two touchdowns.

With five seconds left in the first quarter, Jake Randall intercepted an OCA pass at the Buc 32, running it back 43 yards to set the Bucs up at the 25. Four plays later, Burdick scored from four yards out. Quarterback Ryan Morgan ran for the two points to put Tonkawa up 14-0.

That lead might have relaxed the Buc defenders a little, as the Fighting Eagles came right back for a touchdown drive of their own.

But that would be the end of the OCA offense, as the Buc defense rose up and held the Eagles at bay the remainder of the ball game.

After trading punts in the second quarter, both teams went to halftime, with the Bucs still on top 14-6.

The second half was much different for the Buc offense.

They scored on their first three possessions.

Tonkawa went up 22-6 on a 33 yard pass from Ryan Morgan to Noah Campbell. Burdick added the two point conversion. Morgan finished the night 5-8 passing for 76 yards and two touchdowns.

OCA elected not to punt from their own 38 on their next possession. Instead, they gambled and lost. In fact, on fourth down, Burdick very nearly intercepted.

The Bucs used runs by fullback Jaidyn Guzman of 10 and 9 yards to score on the fifth play of the 38 yard drive with a Morgan quarterback sneak from a yard out. Morgan then hit Nathan Anderson for the two point conversion.

On their third and final varsity drive -- early in the fourth quarter -- Morgan hit Randall for 16 yards and yet another score. This time Brendan Ochoa kicked the PAT and Tonkawa was up 37-6.

It again came after OCA elected not to punt, this time from their own 44. It was fourth and one, but the Eagles didn’t count on Randall sacking the quarterback for a three yard loss.

The final Buc touchdown came from the Tonkawa JV.

Ochoa’s punt had pinned OCA at their own four. A short Eagle punt from the six set the JV Bucs up at the 28. Three plays later and following a 26 yard run by Peyton Keith, Jadin Howard scored from three yards out. Ochoa’s PAT gave the Bucs their final 44-6 margin of victory.

Campbell led the defense with 17 tackles. Davis, Mendoza, Campbell, Burdick, Massey, Ochoa and Randall were all in on tackles behind the line of scrimmage.