We absolutely cannot destroy our economy over this pandemic 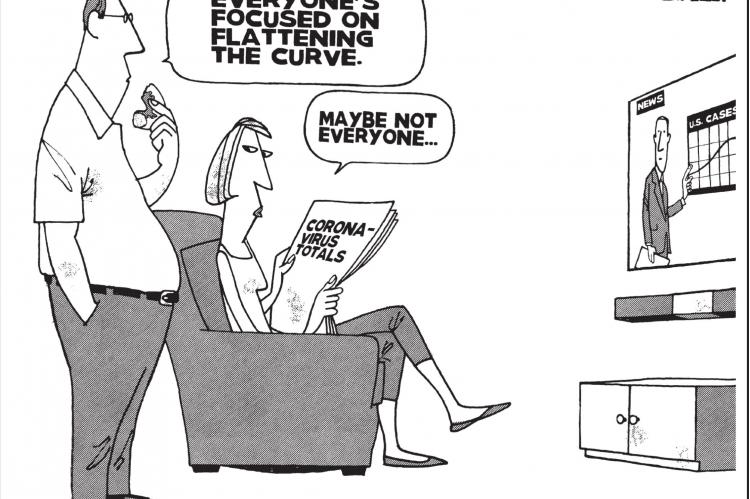 ASHINGTON — Con-and liber-Wservatives arians around the counry are becoming increasngly uneasy about what ashington is doing to our conomy. Before the coroavirus struck, many were nxious about the swamp acking another $1 trillion f debt into our deficit. ow Washington is talking bout spending close to $2 rillion to treat the coronairus, which would be $1-2 rillion that we do not have.

At the president’s daily briefing, one thing we never hear is concern about the staggering debt that we now have and the staggering debt our l e a d e r s are contemplating taking on. The Democrats showed restraint. They showed it for about 15 minutes last week and then began showing their wanton lust for power. They claimed to be speaking for common citizens, but in terms of responding to powerful interests, they revealed that their palms were being greased by unions, special interests and every outfit lobbying for the Green Revolution. I have seen proposals for unprecedented collective bargaining powers, for union representation on boards of directors, for increased fuel emissions standards for airlines and for expansion of wind and solar tax credits.

All supposedly to cure the coronavirus. The Democrats fear they lost Crazy Bernie’s revolution in this election cycle. They seem to think they can win it now, thanks to the coronavirus. Make no mistake about it. The package of goodies they have been suggesting from the Hill constitutes a revolution.

Now perhaps the counterrevolution has begun, and it is being led by President Donald Trump. He tweeted late Sunday night, “We cannot let the cure be worse than the problem itself.” And he went on, “At the end of the 15 day period, we will make a decision as to which way we want to go.” My spies tell me the president has been listening to the right people in and around the White House. America is not a hospital ward.

America is a vast country with the most successful economy ever. It is a capitalist economy. From time to time, it is hit by unforeseen misfortunes. This time, it was hit by an unforeseen virus, but the economy must go on.

The state we had arrived at by last weekend was explained cogently by Bob Luddy, the CEO and founder of CaptiveAire, in The American Spectator on Monday. He wrote: “Our leaders are creating an economic crisis and a major national security risk with limited data. The cure is far worse than any perceived impact by COVID-19.” He urged that Americans be allowed to go back to work, and there is reason to believe that his solution is viable. On Sunday, the Los Angeles Times featured a story about the Nobel laureate Michael Levitt of Stanford University. He had analyzed the cases of COVID-19 throughout the world. He correctly calculated that China would get through the worst of its coronavirus epidemic long before any health experts had predicted it would. His estimates on China’s eventual infected and dead were amazingly accurate.

In an interview with the Times, he cautioned, “What we need is to control the panic.” He was almost insouciant about the virus, saying, “We’re going to be fine.” Is it possible to coax Levitt to join Trump for his daily press conference?

What is more, the president and the commissioner of the Food and Drug Administration announced late last week that the FDA had approved the “compassionate use” of an antimalarial drug, chloroquine, to treat patients infected with COVID-19. It has been used since the 1940s to treat and prevent malaria, and it as been used more recently to treat HIV and autoimmune disease. It began being used yesterday in New York City, and Donald is optimistic about its effects. That is enough for me. Give it a try.

And that’s not all. In France, the infectious disease expert Professor Didier Raoult has had success with two other treatments for COVID-19, hydroxychloroquine and azithromycin. Raoult’s results will take a while, but we ought to have the results in on the chloroquine very soon.

Whatever the case, we need not destroy our economy over this pandemic. Luddy ended his piece with this hortatory coda. He wrote, “I urge our President Trump to speak to Americans from a Midwest manufacturing plant, away from the Swamp, and appeal to all governors and Americans to overcome their fears and take reasonable precautions, but allow America to open for business by March 30.”

R. Emmett Tyrrell Jr. is founder and editor in chief of The American Spectator. He is a senior fellow at the London Center for Policy Research and the author, most recently, of “The Death of Liberalism,” published by Thomas Nelson, Inc. To find out more about R. Emmett Tyrrell Jr. and read features by other Creators Syndicate writers and cartoonists, visit the Creators Syndicate webpage at www.creators.com.