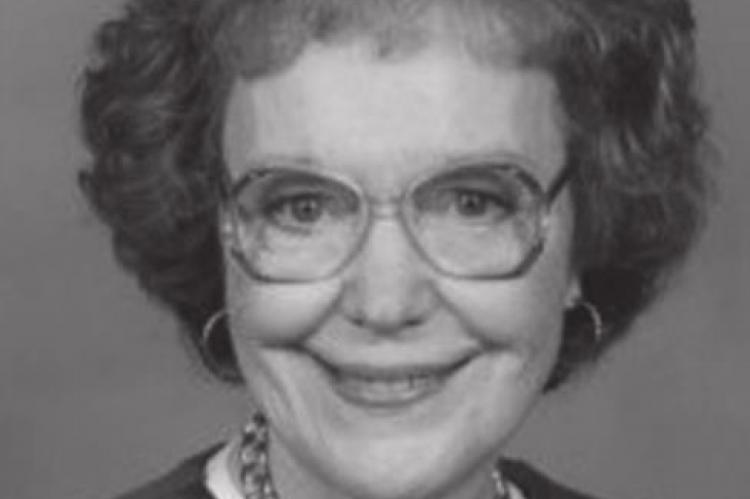 Emma Eline (Sluder) Walcher entered this world on October 26, 1925, and passed from this life on February 17, 2021, at age 95. A private, family Funeral Ceremony will take place at 2:00 P.M., Monday, February 22, 2021, with Dr. Glenn Cope officiating. Those who would like to attend the Funeral Ceremony may view virtually on the Trout Funeral Home website, www.troutfuneralhome.com and click on the live-stream or toolbar icon on the top right corner after 1:45 PM. A public Graveside Ceremony will be held at 3:00 P.M., Monday, February 22, 2021, at Odd Fellows Cemetery, Tonkawa, OK. Face masks are required. Arrangements are under the direction of Trout Funeral Home & Crematory, 505 W. Grand Ave, Ponca City, OK, 74601.

Emma graduated from Byron high school in 1943, where she was a co-valedictorian. The country was amidst WW2, and she was immediately granted an emergency teaching certificate. At age 17, she began her teaching career, teaching grades 1-8 in a rural school. She saved her teaching sal

She saved her teaching salary to pay for college tuition. She attended Northwestern State College, and eventually transferred to Oklahoma A & M University, now OSU. While attending college in Stillwater, she met a handsome fellow, recently returned from his service in WW2. Her first date with Olin Walcher was an outing to play tennis. They eventually fell in love, and married after Emma graduated with a degree in elementary education in 1948.

The couple set up housekeeping in Tonkawa, Emma teaching in the public school, and Olin beginning his career at Northern Oklahoma Junior College, now NOC.

After just a few months, the couple discovered they were expecting their first child. Emma began her new season as mother and homemaker. Aline Annette was born in July, 1949, followed by Vivian in 1950, Ronald in 1952, Gerald Lynn (Gary) in 1955 and Wallace in 1960.

Emma later returned to teaching at Finley rural school and Tonkawa Junior High. She also was co-owner of Tonkawa Home Decorating Center, where she made use of her seamstress skills. She was actively involved with the homeschooling of grandsons Luke, Josh, and Paul.

Emma and Olin were instrumental in establishing the Tonkawa Church of Christ in the early 50’s. The couple raised their family in a strong Christian environment. After Olins’s death, Emma attended the Tonkawa Christian Church, where she served in various capacities.

She also volunteered with the Blood Bank, Meals on Wheels, and served as coordinator of the Tonkawa Food Bank.

In her later years she enjoyed reading, music (especially gospel) and watching Hallmark Channel and Jeopardy.

Emma was predeceased by her parents, husband Olin, brothers Gerald and Tom Sluder, and sisters Dorothy Schmitz and Doris Sluder.

The family requests in lieu of flowers, donations be made in Emma’s honor to the Tonkawa Loaves & Fishes Food Pantry.