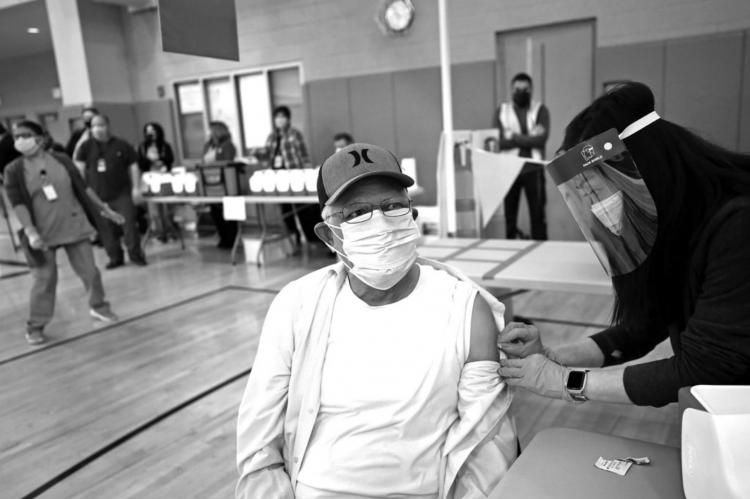 U.S. efforts to detect dangerous, fast-moving COVID-19 mutations that are already bedeviling states remain slim and disconnected as the Biden administration seeks to speed up the process.

While as many as 7,000 to 8,000 samples are being analyzed weekly, that’s just 1.7% of the 463,843 new cases in the U.S. last week, making it little more than a random effort. Meanwhile, three highly-contagious variants have gained significant footholds in the country, with two showing an ability to evade — though not yet overcome — existing vaccines.

State health departments directly send just 770 of the samples analyzed by U.S. health officials, with the rest coming from academic, commercial and state labs. That can lead to over-sampling in areas where labs are located. And the academic labs often have little direct contact with local health departments that need to swiftly start contact tracing to control spread, said David Haussler, scientific director at the University of California-Santa Cruz Genomics Institute.

“We should be doing vastly more,” Haussler said in a telephone interview. “With that light level of sampling, by the time you notice it, it’s already spread too far to do anything about it.” The U.S. should model their efforts after the U.K., he added. That country reported a 10.9% sequencing rate for samples collected during the last week in January.

Variants that have emerged from the U.K., South Africa and Brazil are all now circulating in the U.S., according to data from the Centers for Disease Control and Prevention, with at least 1,688 cases identified since the first of the three turned up in the country less than two months ago.

States in the Great Plains region, where cases are increasing again, rank in the bottom half in the country for cumulative samples sequenced and published publicly, according to data from the CDC. Since January 2020, North Dakota and Nebraska have sequenced just 0.1% of cases and South Dakota has only sequenced 0.09%. Hawaii, Maine, Wyoming, Washington and Utah rank among the highest, ranging from 1.6% to 3.5%.

National and academic labs are producing the rest of the samples in a system that Anthony Fauci, a top adviser to President Joe Biden on the pandemic, said on Thursday “hasn’t been interconnected.”

Fauci, who also serves as head of the National Institute of Allergy and Infectious Diseases, and CDC chief Rochelle Walensky both said last week that the administration is moving quickly to improve the system. On Wednesday, Walensky said the Biden Administration now plans to spend $200 million to update its sequencing efforts.

Under the plan, the number of samples sequenced would grow three-fold to about 25,000 weekly.

The new funding should make a huge difference on the current pace and geography of sequencing, according to Wyman. “In the U.S., you have a couple of hubs where a lot of sequencing has been going on,” she said. “And then just vast expanses where there’s barely any at all.”

The turnaround time for getting samples sequenced and uploaded is crucial to make an impact on public health, she added.

Wyman’s lab has gotten their turnaround time down to two weeks, she said, and that time could shorten by scaling up volume and batching samples together. Beyond sequencing and analysis, scientists say they need access to metadata such as the travel history related to samples to improve public health responses.

Recently, Wyman sequenced samples from an outbreak on campus at the University of California-Berkeley. She was able to confirm that the outbreak was unrelated to a variant detected in other parts of California. And based on the genomic data, she suggested a link to large events happening on campus and coordinated with university health services to respond.

These types of connections have to happen across the country between local health departments and scientists, Wyman said.

Right now, hurdles remain for scientists to access sequencing metadata without active research studies that require review, board approvals and patient consent. Wyman has signed up to volunteer with the local health department just to be able to access more information about the samples she’s sequencing.

Fauci also believes the added funding will make a difference, along with increasing collaboration between the CDC and the National Institutes of Health, which is also part of the plan.

“I think reasonably soon, we’re going to have a rapid acceleration to doing much more genomic sequence surveillance than we have,” he said during an interview on MSNBC. “And that will likely give us better eyes on what’s going on in the community vis-a-vis the dynamics of the virus.”

Public health laboratories in states can already share and access metadata with local public health departments, but they do not have enough staff and need funding to hire more, said Kelly Wroblewski, director of infectious disease programs at the Association of Public Health Laboratories.

Wroblewski said she is hopeful that the recent funding will serve as a stopgap until more funds come through from the U.S. Congress, and that some of it will be invested in building infrastructure at public health labs.

The association has 41 public health laboratories in 33 different states that actively do sequencing, for a total of roughly 4,500-5,000 samples a week.

Of particular concern, is the deadly variant known as B.1.351 from South Africa that was first found in the U.S. on Jan. 28. It has now infected 22 Americans in 10 states, according to the CDC.

A study of that swift-moving mutation released on Thursday found that the Pfizer Inc.-BioNTech SE vaccine provides a weaker response to it than to the original strain. The vaccine is still considered effective against the variant, but researchers said it’s unclear what the lab data means in practice.

The mutation that emerged from the U.K., meanwhile, has been particularly aggressive, identified in 1,661 cases in 44 states as of Sunday, according to the CDC. Federal officials have expressed concern it could soon become dominant nationwide.

The mutation that emerged from Brazil is the latest to reach U.S. shores. It’s now been identified in five cases in four states — Maryland, Florida, Oklahoma and Minnesota.

It’s not clear any of these highly-contagious mutations are necessarily deadlier. But the increased level of contagion alone is a problem, with more transmissions potentially leading to further surges before the vaccination campaign can take hold.