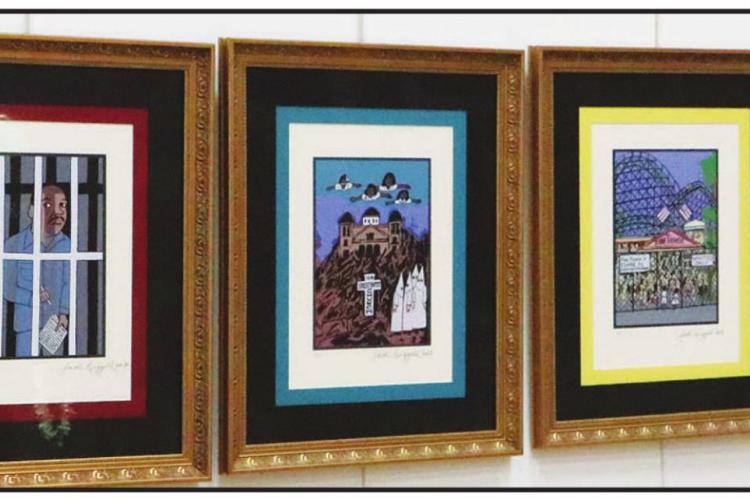 To celebrate Black History Month and to honor the memory of Dr. S. J. Pickens, Pickens Museum opens a new exhibition on February 16 in the atrium of City Central at 400 E Central in Ponca City titled “Letter from a Birmingham Jail” which includes eight serigraphs by Faith Ringgold that depict major events in the Civil Rights Movement including “Freedom Summer” in Mississippi in 1964. The exhibition will be on display during February, 2020. There is no admission charge. “This is a opportunity for citizens of Ponca City to view art that are superlative accompaniments to Dr. King’s stirring text,” says Hugh Pickens, Executive Director of Pickens Museum. “The subjects and scenes that fill Ringgold’s compositions are inspired by the American experience. The themes are universal: inequality and the struggle for its eradication that should inspire us all.”

The exhibition honors the memory of Ponca City resident Dr. S. J. Pickens who traveled to Alabama with freedom riders in 1963 to help register black residents to vote and to integrate lunch counters. Dr. Pickens marched with King and attended Dr. King’s March on Washington for Jobs and Freedom. She said that she never thought she would live to see a black President but forty-five years after the March on Washington Dr. Pickens traveled to Washington DC with her husband to attend Barack Obama’s inauguration on the National Mall in Washington DC.

The serigraphs were a gift to Dr. Pickens from her husband on her birthday in June 2017 that Dr. Pickens treasured. One of the most striking features of the display of the serigraphs is the way they are matted and framed. “Dr. Pickens chose the mattings and the colors for the mattings before she died in October 2017,” says Hugh Pickens. “She had an amazing color sense and sense of proportion. The mattings and framing of the pieces is stunning.”

The public viewed the prints for the first time in 2008 at a reception honoring Ringgold at the New York Public Library’s Schomburg Center for Research in Black Culture. Ringgold’s art has been exhibited in major museums around the world and is in the permanent collections of the Guggenheim Museum, Metropolitan Museum of Art, National Museum of American Art, Museum of Modern Art, and Boston Museum of Fine Art.

Artist Faith Ringgold was born in Harlem in 1930. Her family included educators and creatives, and she grew up surrounded by the Harlem Renaissance.

The street where she was raised was also home to influential activists, writers, and artists of the era-Thurgood Marshall, W.E.B. Dubois, and Aaron Douglas, to name a few. “It’s nice to come up in a period where great changes are being made,” she once said. “And that was my period: the ‘30s to the ‘60s, when radical changes were being made.”

Ringgold received her art education at City College, down the street from her childhood home. “I got a fabulous education in art-wonderful teachers who taught me everything except anything about African art or African American art. But I traveled and took care of that part myself,” she’s said. After graduating, she began her career painting landscapes and still-lifes in the style of modern European masters.

But her practice quickly pivoted to focus on her own experience and the political and social tensions that surrounded her, namely the struggle for equality among women and the black community.

Throughout her career, Ringgold’s work has been driven by the challenges and fulfillments of her life and the lives of those around her. “First of all, you should never make something, as an artist or even as a writer, that is outside of your experience,” she once said. “People will use what is available to them. I am black and I am a woman. There it is.”

In 1963, as the fight for racial justice animated the Civil Rights movement, Ringgold began her seminal “American People Series.”

According to Alexxa Gotthardt, it was the artist’s first body of work to manifest her mature style-one that fused the forms and techniques of folk art with content inspired by the most vocal social critics of her time, such as the writers James Baldwin and Amiri Baraka. In an early painting from the series, The American People Series #1: Between Friends (1963), two women, one black and one white, stand close but seem to stare through each other. A red divider cuts through the center of the composition, bifurcating the two women and emphasizing their distinct experiences and, perhaps, their inability to understand one another.

The ‘60s also gave birth to Ringgold’s role as an activist. In 1968, she organized a demonstration protesting the omission of black artists in a Whitney Museum show highlighting American sculptors of the ‘30s.

Two years later, she was on the front lines of another demonstration at the Whitney-this time protesting the woeful dearth of female artists across the museum’s exhibition program. The demonstrators brandished police whistles, feminine products, and eggs: “I boiled mine, painted them black, and wrote 50 percent on them [to indicate the percentage of women who should be included in shows],” Ringgold said. “It felt like we were doing something and were a part of the movement in America to equalize things.”

“Ringgold passionately combines a deep commitment to social activism with a style that draws from folk art and modernist painting,” says Gotthardt. “Across her body of work, paintings and sculptures lay bare the discrimination that plagues our world and double as rallying cries for urgent change.”

“You can’t sit around waiting for somebody else to say who you are. You need to write it and paint it and do it,” Ringgold once said. “That’s the power of being an artist.”

Before Dr. Pickens went to Alabama in 1963, where she was assaulted for desegregating lunch counters, her father told her never to flinch when she was struck by segregationists and to turn the other cheek when she was beaten. Before she left for the South, her father made her commit to memory the poem Invictus by William Ernest Henley which was her favorite poem and sums up Dr. Pickens life.

The exhibition will be on display at Pickens Museum through February.

Out of the night that covers me,

Black as the pit from pole to pole,

I thank whatever gods may be

For my unconquerable soul.

In the fell clutch of circumstance

I have not winced nor cried aloud.

Under the bludgeonings of chance

My head is bloody, but unbowed.

Beyond this place of wrath and tears

Looms but the Horror of the shade,

And yet the menace of the years

Finds and shall find me unafraid.

It matters not how straight the gate,

How charged with punishments the scroll,

I am the master of my fate,

I am the captain of my soul. 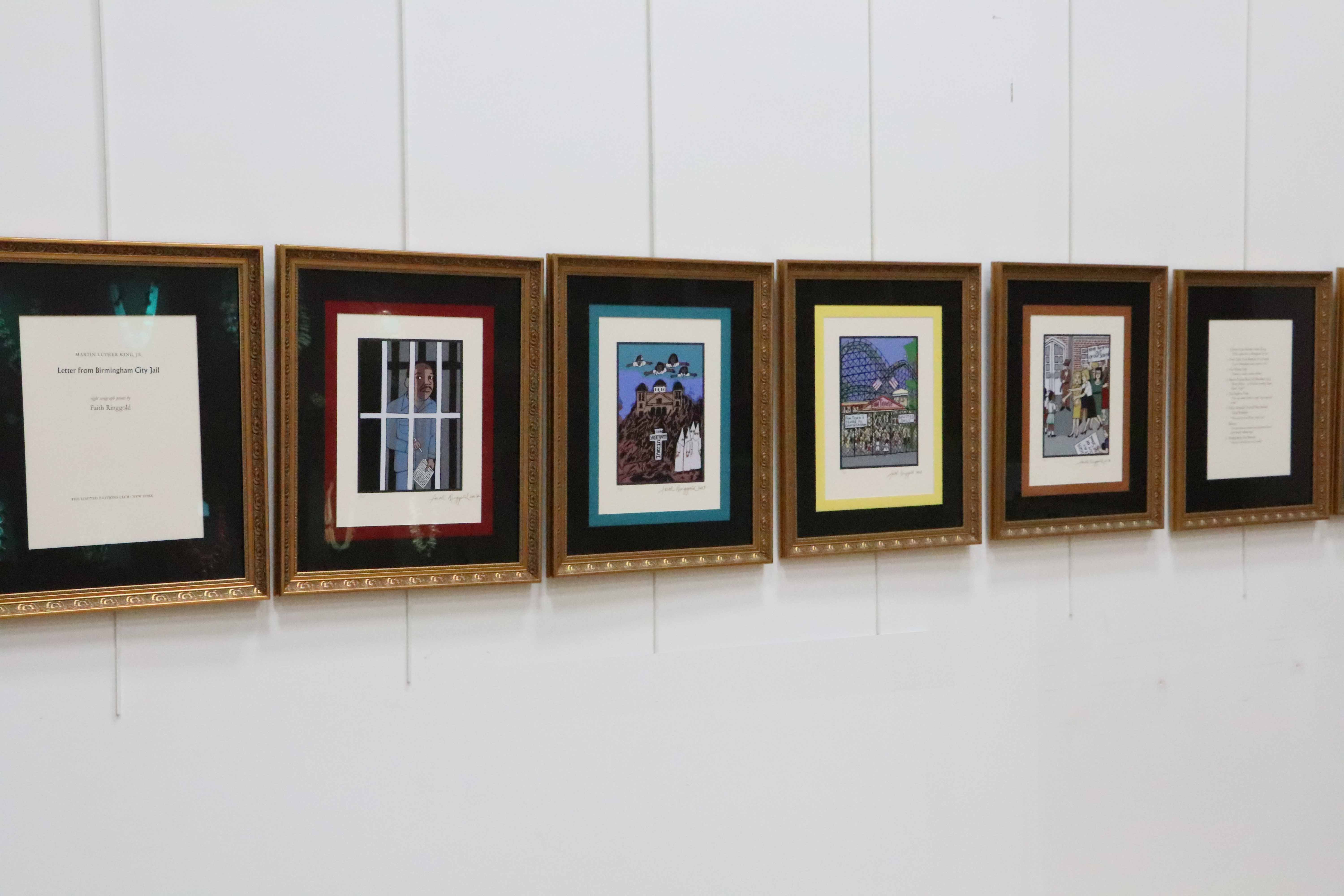