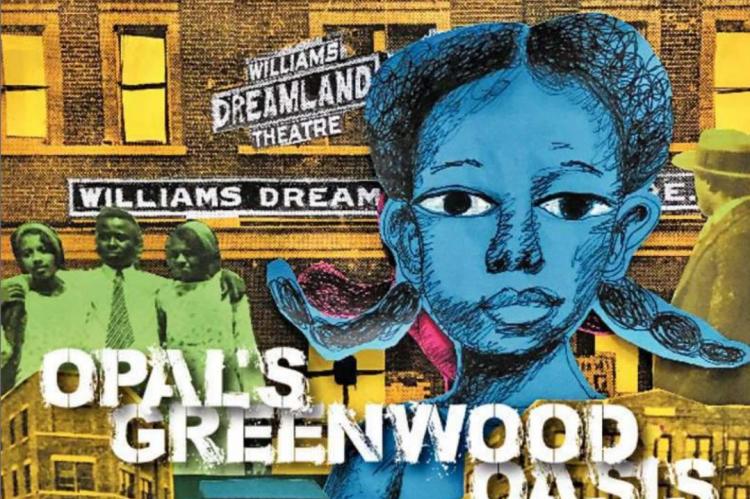 Tulsa, Oklahoma—Independent Tulsa publisher The Calliope Group has revealed the cover for their upcoming children’s release, Opal’s Greenwood Oasis. Written by Najah-Amatullah Hylton and Quraysh Ali Lansana with illustrations by Skip Hill, the book tells the story of the Greenwood District and Black Wall Street before the Tulsa Race Massacre. Shawn Crawford, the pub

Shawn Crawford, the publisher of The Calliope Group, is “excited and honored to publish this beautiful book. We want to celebrate the joys and success of Greenwood while being mindful of the tragedy that would follow.”

Created by Oklahoma artists, the book’s narrator, Opal Brown, takes readers on a tour of her neighborhood and home in 1921. One of the most prosperous Black communities in America, Greenwood is filled with thriving businesses and busy families. Opal notes that “we have everything we need, and everyone looks like me.”

Carefully researched and historically accurate, both the compelling story and Skip Hill’s stunning collage illustrations help to immerse children in the time and place that Opal calls home. From running an errand for her mother on the bicycle she has just learned to ride, to preparing for the Memorial Day community picnic, readers will learn what made Greenwood so special.

Skip Hill is a mixed-media visual artist in Tulsa, Oklahoma whose art is in public and private collections throughout the U.S., Europe, and Latin America. His early inspiration for making was established in childhood through a love for reading and when his father introduced Hill to the collage works of Romare Bearden (1911 –1988).

Beyond his artistic innovation, Bearden’s activism and commitment to the Civil Rights Movement influenced Hill’s commitment to using art and art education as a vehicle for affirming positive personal and social change. That commitment and inspiration is at the heart of his process and in every line of the illustrations for Opal’s Greenwood Oasis.

Najah-Amatullah Hylton’s teaches English in Oklahoma City Public Schools. Her goal is to encourage kids to let their creativity work for them instead of getting them in trouble. She also seeks to bridge the gap between teachers, students and the community.

Hylton has written for several magazines and online publications–The Loop Magazine, OKC.net, VANE Magazine, Urban Roots and Soul Medicine among them. Her first poetry book, The Risk to Bloom, was published in 2014. In 2015, Hylton wrote the poem “Black Future” for the hip-hop artist Jabee, who turned the poem into an album: “In the Black Future There’s a Place So Dangerously Absurd,” released in 2016. Hylton is also a member of Tri-City Collective, an education and arts group.

Quraysh Ali Lansana is the author of eight books of poetry in addition to textbooks and works for children, including A Gift from Greensboro, also illustrated by Skip Hill. A former faculty member of both the Writing Program of the School of the Art Institute of Chicago and the Drama Division of The Juilliard School, Lansana served as Director of the Gwendolyn Brooks Center for Black Literature and Creative Writing at Chicago State University and was an Associate Professor of English/Creative Writing.

Lansana currently fills several roles at Oklahoma State University-Tulsa: Acting Director of the Center for Truth, Racial Healing and Reconciliation; Writer in Residence for the Center for Poets & Writers; Lecturer in English and Africana Studies. He is also a Tulsa Artist Fellow and the cofounder of Tri-City Collective.