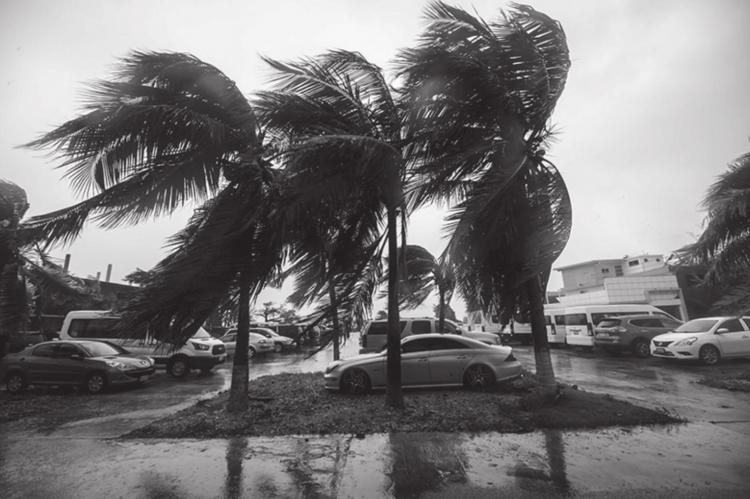 Mexican residents and tourists were hunkered down Wednesday morning as Category 2 Hurricane Delta rips into the Yucatan peninsula.

Delta made landfall around 5:30 a.m. on the peninsula’s shores near Puerto Morelos, Mexico, just 35 miles west of Cancun while maintaining a forward speed of 17 mph, the National Hurricane Center showed in a special 6:45 a.m. update.

Briefly classified as a Category 4 major hurricane Tuesday, Delta’s maximum sustained wind strength fell Wednesday to 105 mph before making landfall. While the storm lost strength, Delta grew in size with its hurricane-force winds extending outward 30 miles from its center and its tropical-storm-force winds extending 140 miles, according to the 8 a.m. update. Further weakening is expected as Delta chugs through the peninsula, but the storm is expected to regain its major hurricane status, with winds greater than 110 mph, late Wednesday as it enters the Gulf of Mexico and turns toward the United States.

A hurricane warning is in effect for Tulum, Mexico to Dzilam, and Cozumel. While a tropical storm warning was placed for the Cuban province of Pinar del Rio, Punta Herrero, Mexico to Tulum, and from Dzilam to Progreso, Mexico.

Quintana Roo Gov. Carlos Joaquin said the state government had prepared, but warned residents and tourists that “it is a strong, powerful hurricane,” according to the Associated Press. He considered it a good sign that Delta had weakened a bit late Tuesday, but said the area hadn’t seen a storm like it since Hurricane Wilma in 2005.

Delta’s storm surge is hammering the Yucatan in some areas with waters levels from 6 to 9 feet above normal tide. Rainfall is expected to add another 4 to 6 inches of water, with isolated maximum totals of 10 inches across portions of the northern peninsula.

Throughout Tuesday, the evacuations of low lying areas, islands and the coastline expanded as Delta exploded over the warm Caribbean waters offshore. Much of Cancun’s hotel zone was cleared out as guests were bused to inland shelters. In Cancun alone, the government opened 160 shelters.

Some 300 guests and nearly 200 staff from the Fiesta Americana Condesa hotel were taken to the Technological Institute of Cancun campus. All wearing masks, they spread out on thin mattresses in a classroom building and tried to get comfortable as workers boarded up the building’s windows in a light rain. Some played cards or watched videos on their phones, while others called relatives.

“The hotel has done a good job of making sure that we were provided for and that we’re going to be safe here in this place, so we don’t have any concerns at all,” said Shawn Sims, a tourist from Dallas sheltering with his wife, Rashonda Cooper, and their sons, 7-year-old Liam and 4-year-old Easton.

State tourism officials said more than 40,000 tourists were in Quintana Roo, a fraction of what would normally be there. Delta’s damage comes on top of months of pandemic-induced lockdown that has devastated the state’s tourism industry. At the Cancun Convention Center, 400 tourists from hotels and rental properties bunked over night.

Delta is forecast to start a northwestern journey later Wednesday over the warm waters of the Gulf of Mexico where conditions are ideal for the major hurricane to regain its Category 4 status with maximum sustained winds reintensified to 130 mph, the NHC said. After, Delta is then forecast to slowly move toward the United States’ Gulf Coast Thursday night or Friday morning with it likely impacting Louisiana. Although, Delta should lose some steam and downgrade to a Category 3 storm before doing so. Rainfall totals are forecast to bring 4 to 8 inches of rain, with isolated maximum totals of 12 inches across portions of the central Gulf Coast north into portions of the Lower Mississippi Valley, creating a danger of flash flooding. Delta is the third major

Delta is the third major hurricane of the 2020 season, and was the third Category 4 storm behind Laura and Teddy; the former of which also made landfall along the Gulf Coast.