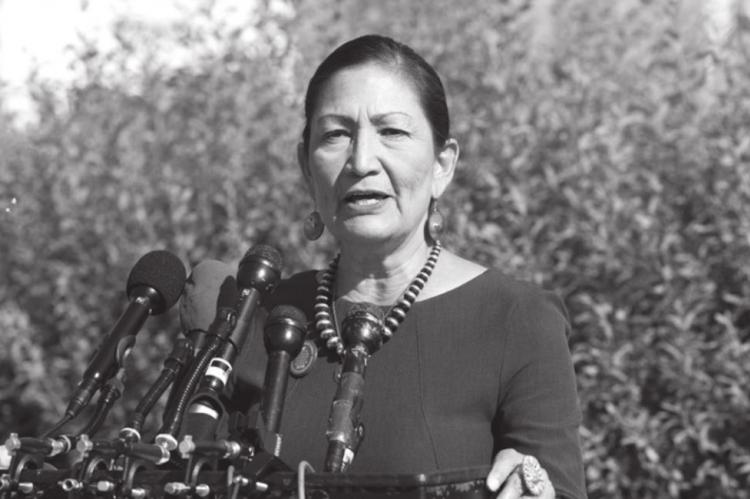 As the chief executive officer of Ho-Chunk, Inc., the economic development corporation owned by the Winnebago Tribe of Nebraska, Lance Morgan says he knows who makes the big decisions in an organization.

That’s why he was pleased Thursday to learn Rep. Deb Haaland, D-N.M., will be nominated by Presidentelect Joe Biden as the first Native American to lead the Interior Department.

After all, the Bureau of Indian Affairs, located within the department, answers to the person sitting in the secretary’s chair.

“We’ve never had somebody who’s given the orders before,” Morgan said.

A member of Pueblo of Laguna in New Mexico, Haaland’s role as Interior secretary could mark a turning point for an agency that has often had a fraught and, at times, bitter relationship with federally recognized tribes. Haaland would assume the helm of a massive bureaucracy that manages federal land, offshore drilling and leasing, endangered species, mining cleanup, scientific research, geological studies, national parks and grazing.

Advocates said that new perspective will guide a range of policy decisions affecting Native Americans, such as guarding tribal lands against oil and gas development and protecting sacred cultural sites.

But Haaland will also be in a position to influence policies across the government as a member of the Cabinet, said Kim Teehee, Cherokee Nation’s director of government relations.

That’s especially true for areas on which Haaland has focused during her time in the House.

“She would be uniquely positioned to work with the Department of Justice, for example, on the Violence Against Women Act,” Teehee said.

Teehee noted that Native American voters helped deliver to the Democratic presidential ticket key states such as Arizona and said it was important they be recognized as Biden builds a Cabinet that reflects America.

“It’s an unprecedented nod to Indian country that we matter and that we’re visible in this country,” Teehee said of the nomination.

Dallas Goldtooth, campaigner with the Indigenous Environmental Network, described the nomination as a step in the right direction both for tackling climate change and recognizing indigenous self-determination.

“Having somebody that understands that struggle within the administration goes a long way,” Goldtooth said.

Echohawk said he’s hopeful Haaland will help undo what he calls “the damage,” done by the Trump administration, including the diminishment of Bears Ears National Monument in southeast Utah. Of the 1.9 million acres that were protected from development by President Barack Obama, 85 percent was removed under Trump, he said, and opened to oil, gas and mineral extraction — a direct threat to Native American cultural sites and burial grounds.

“That’s typical of the kind of things this administration has done that tribes oppose,” he said.

Rep. Raul M. Grijalva, D-Ariz., chairman of the House Natural Resources Committee, told reporters the nomination represents a “landscape change” at a department whose legacy has been marked by disenfranchising Native Americans.

“The history of Interior has been one that has been anti-Indian in every sense of the word,” Grijalva said.

At one time, it appeared Haaland had faded from being the frontrunner for the post, in part because of concerns among Democrats about their razor-thin House majority.

Grijalva said she had the support of many groups — progressives, young people and others. But Native American advocates were central in making her the pick, he said.

“Indian country united behind her nomination and of course that had a significant impact,” he said.