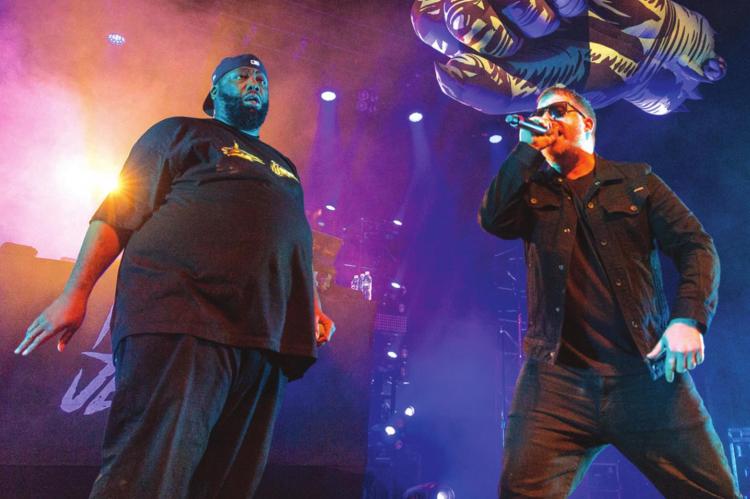 As far as live music goes, it had to be the worst year since the invention of the electric guitar, right?

Stuck at home, artists were left with more time to write and record, so, combined with recordings that were in the can before the pandemic, it was a surprisingly plentiful year for new music.

Album of the Year: “I am duty-bound to be here to simply say: That it is your duty not to burn your own house down for anger with an enemy.” That was Killer Mike, in Atlanta, at a mayoral news conference in May addressing protesters in one of the year’s most impassioned speeches. Just a few days later, he and El-P dropped a mega-truth bomb on 2020 with “RTJ4,” a fourth album from Run the Jewels that provided a soundtrack to the chaos already breaking out on the streets. The intensity never lapses on “RTJ4,” which samples Gang of Four, blends Mavis Staples and Josh Homme (!) and unleashes 2 Chainz while weighing in on all that plagued us in 2020. Was there a song title that summed up the year better than “holy calamaf---”?

Artist of the Year: Well aware that her fans were struggling with the pain or boredom of the pandemic, Taylor Swift gifted them with not one but two surprise albums, “Folklore” (July) and “Evermore” (December), that rank among her best. The follow-ups to her playfully poppy “Lover” found her working with Aaron Dessner, of The National, who put his indierock band’s soothing, melancholy tone and texture on these sister albums filled with some of her most reflective and thoughtful songs.

Song event of the year: While everyone was all about masks and social distancing, Cardi B and Megan Thee Stallion told us to bring “a bucket and a mop” in a contender for the most audacious sex single of all time. We can’t even talk about the content here. The accompanying video for “WAP” was high-style eye candy, whether you love boobs, butts, leopards or snakes. The 313 million views on YouTube indicate people do in fact like those things. Less sexy but almost as entertaining was the Ben Shapiro remix he had no idea he was walking into.

Best country/Americana album: Aubrie Sellers, daughter of Lee Ann Womack and stepdaughter of producer Frank Liddell, casts a spell on “Far From Home,” a “garage-country” record that, somewhat like the Eels, allows for disruptive guitar work, from shimmering to grungy. It’s “a beautiful collision” with her angelic voice floating above the clatter, including a gritty duet with Steve Earle on the defiant rocker “My Love Will Not Change.”

Best metal album: There’s no one-size-fits-all in metal, so allow me to do three. My favorite came from Bristol, U.K., band Svalbard, who toil in the post-metal, post-hardcore, blackgaze genre popularized by Deafheaven. On third album “When I Die, Will I Get Better?” Svalbard creates a titanic roar with shoegaze guitars that grind and swirl, hyperdriven beats and a blend of screaming and pure, pretty vocals (for relief) from Liam Phelan and Serena Cherry, the self-described “Minnie Mouse of Metal.” The lyrics, centered around her battles with depression (“I see you all/beyond this pain/but I remain trapped/with the monsters in my brain”), manage to push through the noise. Tied for second are two Pittsburgh bands â€” one heralded and one that is more our little secret. The former is Code Orange, who, on the week of the shutdown, continued the hurt with “Unearthed,” another daring, boundary-busting foray in the realms of metal, hardcore, industrial, indie and EDM. This turbulent follow-up to “Forever” came with a concept about the dangers of losing yourself in technology. Those you prefer driving oldschool metal can do no better than the Deb Levine-led Lady Beast, who continued to rock in the British Steel tradition of Judas Priest on fourth album “The Vulture’s Amulet.”

Best indie-rock album: Much like the Code Orange, but in a different way, “Fetch the Bolt Cutters” will leave you rattled and exhausted by the time Fiona Apple crashes it to a halt at 51:49. Taken from the TV show “The Fall,” the title refers to a violent freeing from restraints and constrictions, much in contrast to the reality of 2020. Apple unleashes her imagination and exorcises demons on this frenetic, stream-of-consciousness-fueled ride that knocks us around with unexpected bursts of noise and percussion.

Best punk rock song: The first voice you hear on the new Anti-Flag album is that of Donald Trump, over contorted guitar feedback, declaring, “In the good ol days this doesn’t happen, because they used to treat them very, very rough.” The authoritarian comment about protesters clearly lit a fire under Anti-Flag, who come out blazing on new album “20/20 Vision” with “Hate Conquers All,” a political punkrock anthem meant not for clubs but massive soccer stadiums.

Best album from out of the blue: Neil Young was so fertile in 1975 that “Homegrown” was shelved in favor of something else he had lying around: the brilliant “Tonight’s the Night.” In 2020, we finally heard “the one that got away.” Written in part about a difficult split with actress girlfriend Carrie Snodgress, “Homegrown” has its raw, tender points (“Separate Ways,” “Star of Bethlehem”), but the album also has its rough and rowdy ways, with the jubilant stoner title track and the jealous blues rocker “Vacancy.”

Best of the legends: Can you imagine being told in the early ‘60s that your grandchildren, maybe even your great-great grandchildren, would be able to experience new albums by Bob Dylan and Paul McCartney in 2020? What’s even crazier is how good they were. Dylan’s 39th album, “Rough and Rowdy Ways,” was preceded by a beguiling 17-minute single, “Murder Most Foul,” that arrived to delight and confuse us just two weeks into the quarantine. As for the 70-minute album, it’s one of his most wordy, rambling, cantankerous and playfully humorous. “McCartney III,” coming 40 years after “McCartney II,” is so named for its similarly shacked-up DIY home recording method. Macca, sounding remarkably like his old Beatles self, whips up a mix of rockers, lullabies and experimental oddities that reveal the spark still here. And then there’s The Boss. When Bruce Springsteen was keeping us company by playing DJ on Sirius’ E Street Radio, I don’t remember him mentioning an album in the works. He sent us “Letter to You,” the first album with the E Street Band since 2014 and one, inspired by the death of his former band leader, that feels very much alive while taking a nostalgic look back at his rock ‘n’ roll roots, punctuated by three gems written in the early ‘70s. Like watching Mick Jagger dance, these septuagenarian albums serve as inspiration for all of us to pursue what we do all the way to the end.