By David Miller David@poncacitynews.com
Time to read
1 minute
Print
a- a+
Published 2 weeks ago
Last updated 2 weeks ago
Read so far
In-page image(s) 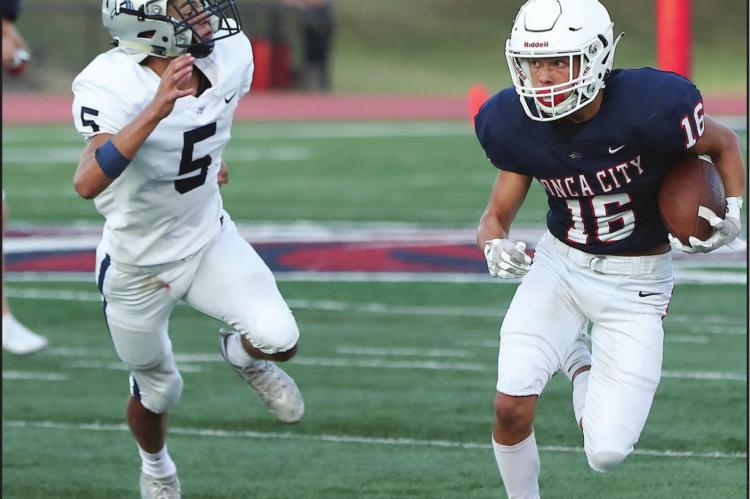 The Ponca City Wildcats are geared up for their first road trip of the season, a Friday game at Tulsa McLain.

Both teams will be looking for their first win. Ponca City was edged 19-17 by Class 6A-1 Enid, while McLain lost 27-2 to Class 5A power Tahlequah. Friday’s game is scheduled to start at 7 p.m.

Against Enid the Wildcats were able to move the ball enough to pick up 17 first downs and score two touchdowns.

The touchdowns came on a pass and a running play. Coach Scott Harmon was pleased with the offensive production of his team, although he noted that the relatively young Wildcats had some issues to work on during the week. Ponca City’s defense also is young and gave up a couple of big touchdown plays to the Enid offense.

McLain struggled on offense against Tahlequah and the only points the Titans scored came on a second quarter safety scored when the Tahlequah quarterback fell on a bad snap in the end zone to avoid giving up a touchdown. The McLain defense, meanwhile was fortunate to give up only 27 points as Tahlequah turned the ball over on several occasions.

In addition to Ponca City’s game, there are several area games of note on the schedule--Perry at Tonkawa, Blackwell at Oklahoma Bible, Newkirk at Woodland, Pawnee at Okemah on Saturday, and Kiefer at Morrison. Deer Creek-Lamont has yet to start the season.

The Tonkawa Buccaneers will entertain the Perry Maroons Friday night in quest of their second victory. Last week the Bucs topped Newkirk 49-14. Meanwhile Perry brings an 0-2 record to the contest. Perry’s record is a bit deceptive as it lost to two of Class A’s top teams in a 64-7 defeat to Pawhuska in Week Zero and a 49-13 defeat at the hands of Cashion last week. The Maroons face yet another Class A Top 10 team in Tonkawa.

The Blackwell Maroons opened last week by romping 51-0 over the Oklahoma City Patriots. This week’s challenge will be a little tougher. Oklahoma Bible defeated at tough Casady team 8-0.

The Woodland Cougars are 1-0 after defeating Oklahoma Union 34-30 last week. The Cougars will host the Newkirk Tigers in this week’s contest. The Tigers are 0-1 after dropping a 49-14 decision to Tonkawa in an ancient rivalry between two Kay County teams. The Woodland-Newkirk game has some added interest because Newkirk Coach Eddy Scott had a stint as Woodland coach recently.

The Pawnee Black Bears will travel to Okemah for a Saturday game. Pawnee is 1-1 after an opening loss to Washington (35-14) and a second game win over Mooreland (38-14). Okemah is 1-0 gaining a Week Zero win over Henryetta (40-20). Some area fans will remember when Okemah Coach Joe Turner was at Woodland.

The Morrison Wildcats ran into a buzz saw last week in their opener at Oklahoma Christian School. The Saints piled up a 40-8 victory over the Wildcats. Their opponent this week scored 41 points against Kellyville in their opener, but gave up 62 in absorbing a loss. The Kiefer-Morrison rivalry has developed in recent years.