By David Miller David@poncacitynews.com
Time to read
3 minutes
Print
a- a+
Published 3 months ago
Last updated 3 months ago
Read so far
In-page image(s) 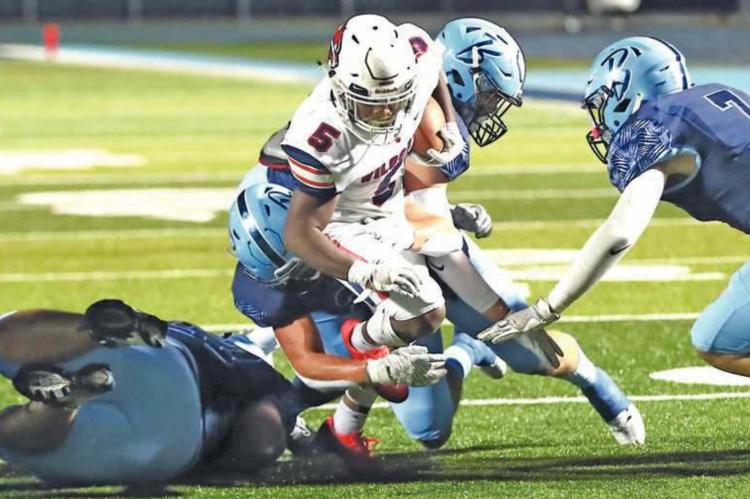 An opponent that is annually one of the top four or five teams in Class 6AII is next on the agenda for the Ponca City Wildcats. The Wildcats are scheduled to host Booker T. Washington 7 p.m. Friday at Sullins Stadium.

The Hornets will bring a 5-2 overall record to Friday’s game and are currently riding a threegame win streak. They are 3-1 in District 6AII-2 competition with wins over Bartlesville, Sand Springs and Putnam West. Their non-district record includes wins over Southmoore and Del City and a loss to Bishop McGuinness.

“They are a very athletic team that can do a lot of things well,” Ponca City Coach Scott Harmon said in assessing the task ahead for his Wildcat team. “They have a very aggressive defense and their players fly to the ball. They might be the best defense we’ve seen this year.”

Ponca City was in the hunt for a playoff spot from District 6AII-2 having a 2-2 district record with three games to play. But earlier this week the Oklahoma Secondary School Activities Association announced a modified protocol for for playoffs that changes the way teams qualify for the postseason.

The modification was made necessary because of the number of game cancellations that have happened due to COVID-19 concerns. Some teams across the state have played only one or two district games. There have been two cancellations in District 6AII-2, both involving Putnam West. Bixby and Muskogee lost games with West due to the team being on quarantine. The OSSAA policy is somewhat vague out of necessity because of so many different scenarios. But it does require rankings by coaches in each district which will be a determining factor. Also there is a provision allowing a playin week and opening up the postseason to any team that would like toe included. “All member schools currently in district play would be offered an opportunity to join the playoff bracket,” the OSSAA announcement reads.

Regardless of the playoff implications, the Wildcats are looking at the Booker T. Washington game as an important contest. The Ponca City defensive unit has been playing well, and the offensive team has shown steady growth week after week. Coach Harmon stresses that his team’s game plan against BTW will be basically the same as it has been in each previous contest--move the chains, control the clock and keep the opponent’s offense off the field as much as possible.

Friday’s game is the nextto-last home contest for the Wildcats, who are scheduled to travel to Bixby next week and then close out the season against Muskogee on Nov. 6 at home.

Other Friday district games include Bixby at Muskogee, Putnam West at Bartlesville and Sand Springs at Choctaw. Area games of interest include Blackwell at Chisholm, Luther at Newkirk, Hinton at Tonkawa, Hominy at Woodland, Pawnee at Morrison and Deer Creek-Lamont at South Coffeyville.

The Tonkawa Buccaneers will be looking for their fourth district win as they host the Hinton Comets. Hinton comes to the game with a 1-4 record having beaten Hennessey 14-13 in its opener and then losing to Mangum, Merritt, Oklahoma Christian Academy and Oklahoma Bible. Tonkawa’s only loss was a 39-26 decision to Perry. The Bucs have wins over Newkirk, Blackwell, Crescent, Watonga and Oklahoma Christian Academy.

The Pawnee Black Bears’ game with Morrison has become a pretty good rivalry in recent years. Both teams have good tradition and generally are among the top teams in Class A statewide. This year the Bears are 5-1 with wins over Mooreland, Okemah, Hominy, Woodland and Tulsa NOAH. The lone loss was to Class 2A powerhouse Washington. Morrison is 4-2 with wins over Kiefer, Porter, Chelsea and Warner. The losses have been to Oklahoma Christian School and a 40-36 nailbiter to Woodland.

Blackwell is coming off a big 37-19 win over Kay County rival Newkirk. The Maroons are 4-3 overall and 2-2 in district play. They have non district wins over the Oklahoma City Patriots and Oklahoma Bible and district victories over Hennessey and Newkirk. Their losses have been a 15-14 defeat at Tonkawa and big losses to Perry and Luther. Normally potent Chisholm is having an off-year with a 1-6 record. The Longhorns opened the season with a 19-8 win over Fairview, but since then have lost to Kingfisher, Perkins, Oklahoma Christian School, Luther, Perry and Hennessey.

The Newkirk Tigers are looking for their first victory of the season. They have shown improvement over the weeks, but have a huge challenge this week in Luther. The Lions have played a very tough schedule and are 3-4 going into Friday’s game. Their losses have been to powerhouse teams in Prague and Jones, plus defeats in games with Antlers and Oklahoma Christian. Their wins have been lopsided affairs (49-7 over Blackwell, 40-0 over Chisholm and 37-12 over Alva). Newkirk is 0-6 with losses to Tonkawa, Woodland, Oklahoma Bible, Alva, Oklahoma Christian and Blackwell.

The Woodland Cougars are looking like some of the teams back in the school’s illustrious past. They have compiled a 6-1 record and have wins over Oklahoma Union, Newkirk, Mooreland, Caney Valley, Morrison and Chouteau on their resume. The one loss was a 28-8 defeat at the hands of a very good Pawnee team. Hominy remains the last major obstacle on the Cougars schedule. The Bucks’ 3-3 record is a little deceptive as their losses have been to some really good outfits-Class 4A Cleveland, Class A No. 1 Pawhuska and Class A No. 4 Pawnee. Their wins have been over the Ponca City JV, Tulsa NOAH and Caney Valley.

The DCLA Eagles are struggling. They have been beaten soundly in each of their five games. South Coffeyville would appear to be a more competitive opponent as the Lions are 1-4. The victory was over Cave Springs, with losses to Porum, Drumright, Timberlake and Bluejacket.