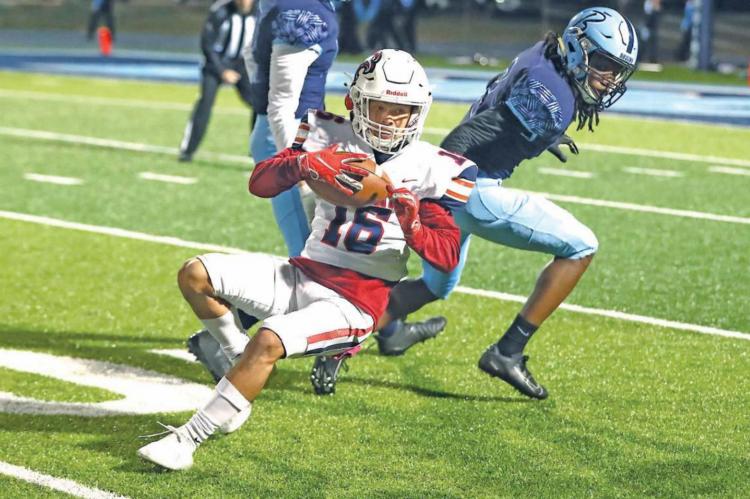 The play of both the offensive and defensive units in Thursday’s 10-7 victory over Bartlesville was pleasing to Wildcat Head Coach Scott Harmon.

With the win the Ponca City team brought home the Conoco-Phillips traveling trophy, awarded annually to the winner of the Po-Hi contest with Bartlesville. In addition, it kept alive the Wildcats’ hope of earning a spot in the Class 6AII playoffs, a place not reached by a Ponca City football team for quite a few years.

The Wildcat defense, overall, did a good job of bottling up the Bartlesville offense, which had put more than 50 points on the scoreboard in a game against Muskogee on Oct. 9. That is, all except the opening Bruin possession when Bartlesville drove 80 yards in just three plays for a touchdown. The first touchdown took the Bruins less than two minutes. They weren’t able to score again in the final 46 minutes of action.

“The defense bent on a couple of occasions, but it didn’t break,” Harmon said. “They played extremely hard. I’m proud of the defensive (coaching) staff and the defensive players. They did a great job of stopping Bartlesville’s good offense.”

“If we had taken advantage of the opportunities we had, the score wouldn’t been as close as it was,” Harmon said. Certainly a touchdown or two more would have taken some of the pressure off the defensive unit late in the game when Bartlesville was moving the ball toward the Ponca City goal.

But Harmon was pleased with the way the offensive unit moved the ball, taking valuable time off the clock and keeping the Bruin offense on the sidelines as much as possible.

“Our game plan always is to move the chain and keep the other team’s offense off the field as much as possible. Our offense was able to do that. We controlled the game in terms of time of possession and first downs. I think they had the ball only five times in the second half,” Harmon said.

Ponca City running back Cam Jackson had another 100-plus yards rushing game as he carried the ball 25 times for 133 yards. Blake Bristow had 84 yards on 21 carries and Elijah Phillips had six yards on four carries plus one touchdown. Quarterback Nate Harbeson completed six of 11 passes for 66 yards and suffered one interception. Sam McKinney was the top receiver catching four passes for 73 yards. Jackson’s longest run was 44 yards, Bristow’s was 15 yards and McKinney’s longest reception was 31 yards.

The Wildcats are now 3-3 overall and 2-2 in district competition. Three teams, Bartlesville, Putnam City West and Muskogee appear to be out of the running for district playoff spots. Bixby leads the district with a 3-0 record, Choctaw is 3-1, Booker T. Washington is 3-1, Sand Springs is 2-2 and Ponca City is 2-2. The Wildcats are scheduled to play Booker T. on Friday in Ponca City.