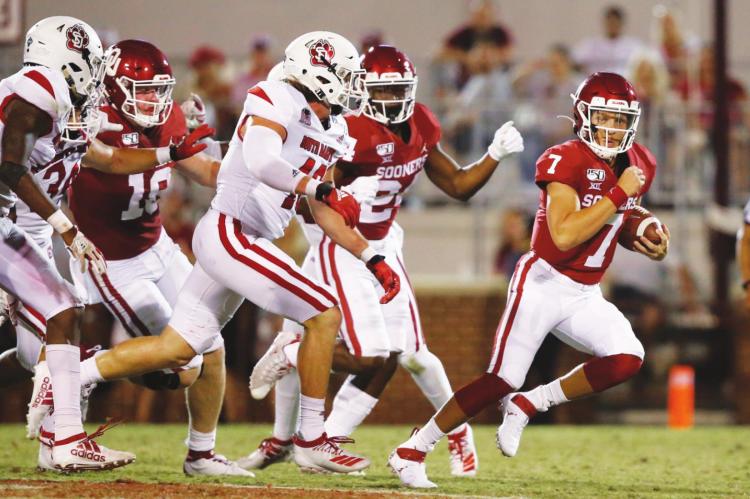 Spencer Rattler is the next man up in the Oklahoma quarterback factory.

Rattler, a redshirt freshman, is the Big 12’s Preseason Newcomer of the Year. He was the consensus No. 1 quarterback nationally in the 2019 recruiting class.

The pressure on Rattler will be great. Under Riley, Baker Mayfield and Kyler Murray have won the Heisman Trophy and Jalen Hurts was the runner-up last season.

Riley believes Rattler has the tools to handle it.

“I think his confidence and belief in himself and his teammates — I think that’s the thing that stands about him right now,” Riley said. “He’s never been afraid of the moment, which for young players — that’s a key thing, and I don’t know that that’s really coached. That’s something that guys either have or they don’t at a young age.”

Mordecai, a redshirt sophomore, was the No. 2 quarterback at the start of last season but later fell behind Rattler. Riley said Mordecai missed much of fall camp due to an undisclosed injury and couldn’t fully compete, and Rattler performed well enough to earn the job.

There is plenty of talent for Rattler to work with.

At receiver, the Sooners will be looking to fill the void left by CeeDee Lamb, who now is with the Dallas Cowboys. The next man up is Charleston Rambo, a first-team preseason All-Big 12 selection. The speedster caught 43 passes for 743 yards and five touchdowns last season.

Oklahoma also has UCLA transfer Theo Howard at receiver. He started 24 games for the Bruins and had 119 catches for 1,359 yards and nine touchdowns. He missed most of last season due to injury.

Oklahoma has also added Marshall transfer Obi Obialo at receiver. He started every game in 2018, but missed most of 2019 with an injury.

Oklahoma has taken some hits to its depth at running back, but there’s still plenty of talent. Preseason All-Big 12 selection Kennedy Brooks has reportedly opted out of the season. Trey Sermon, who ran for more than 2,000 yards at Oklahoma, has transferred to Ohio State.

Riley said T.J. Pledger has been the best of the remaining group so far. The junior has fought through injuries during his career and finally will get a chance to shine.

“He’s really practiced well,” Riley said. “He’s been our most consistent player (at the position). I think that he’s in the best shape that he’s been in here. He’s healthy and really, really doing some nice things.”

Oklahoma led the Big 12 in total defense during league play, allowing just 330.6 yards per contest under first-year defensive coordinator Alex Grinch. That was overshadowed by a total implosion in a 63-28 loss to LSU in the Peach Bowl.

Oklahoma center Creed Humphrey is a first-team preseason All-American and the anchor of a veteran Oklahoma line. Last season, he was a finalist for the Rimington Trophy for the nation’s top center. He has 25 starts over the past two years.

The next kick sophomore kicker Gabe Brkic misses will be the first of his college career. Brkic made all 17 of his field goals and all 52 of his extra points last season. He’s a preseason secondteam All-American.

In early August, Riley said nine Sooners tested positive for COVID-19 after he gave his players a week break from team activities. Most of those cases have cleared up.

The Sooners lost a home game against Tennessee and a road game against Army during schedules changes prompted by the pandemic. They will open at home Sept. 12 against Missouri State.