Dom Amore: Yale’s Tony Reno, Central’s Ryan McCarthy will make most of a fall without football 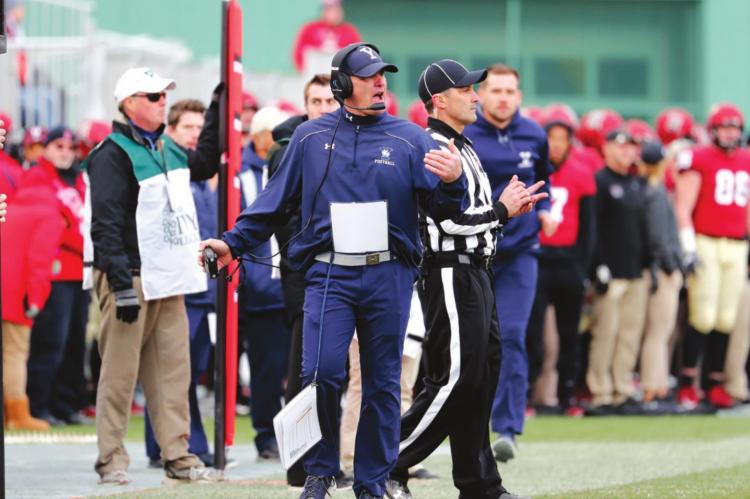 “We kind of saw this coming a few weeks before,” says Reno, who led Yale to the Ivy League title last fall, “and we were able to get ahead of it with the team. The guys understood.”

In the days following the July 8 announcement that the Ivy League was canceling fall sports, Reno told his players to take three weeks off, no football, and during that time had one-on-one conversations that left him saying, “We’ve got some incredible kids.”

“... They’ve been working relentlessly for almost a year to get ready for this,” Reno says, “and to tell them they’re not going to have a season, it was tough in a sense that as a coach you don’t want to have to deliver that news. But what was encouraging was how our guys really understood the ‘why.’ The season’s not going away. Everyone can still play. You’re not losing a year. Everybody is going to get the year back if they want it. How refreshing it was for guys to have a greater understanding of the world we’re living in today and why the decision was made to protect them. It wasn’t made to take anything away from them.”

At Central Connecticut, where McCarthy led the Blue Devils to an NEC title and into the FCS playoffs last season, his first as head coach, it was learned on July 23 that if there is football at all during this academic year, it will be in the spring.

“What we tried to do is be as transparent as we could,” McCarthy says. “I was up front with the staff and the players: ‘I don’t feel great about us playing in the fall, and you need to prepare for that.’ I didn’t want to give them false hope. We did have a strong year last year, and we built up a lot of momentum, and it’s hard. The kids just want to get back to normal. I would say the majority of the guys were, I don’t want to say relieved, but they had questions, too. From a safety standpoint, are we going to be OK? I reached out to 10 or 15 guys I consider our leaders, and asked how do they feel? And they weren’t sure.”

That brings us to mid-August. Reno will be going back into his office this week, and Yale’s players will be returning to campus for the semester. CCSU will be opening, at least in a limited way, and McCarthy will be seeing players for the first time in months.

And next comes another function that marks successful football coaches: making the most of the situation they are dealt, turning the negative into positive.

“So I said to staff, ‘We have a chance to recover lost time,’” Reno says, “and that’s how we’re looking at it. We started the beginning of August to focus on getting ourselves bigger and stronger.”

In a profession known for meticulous planning and preparation, coaches like Reno and McCarthy are traveling through lands for which no road map exists, trying to build by eye and ear, without a blueprint. What can be said with certainty is that when college football does return to normal, the coaches who make the best use of this gameless autumn will be the most successful once again.

“What you’re able to do now,” Reno says, “is look at things other people are doing that you’re intrigued about, that you’re normally able to do in the springtime. You do your quality control, what you do well. Look at other folks: Who’s doing the best at this? But even more so, we’re getting back to spending time on what I feel wins football games, and that’s blocking, tackling, really becoming master craftsmen at our positions. We’re going to really be able to develop these guys as individuals, as offensive linemen, defensive backs, quarterbacks.”

Yale was 9-1 last season, winning the Ivy League, which for their program is the end game, with that incredible overtime victory over Harvard. Under Reno, 46, the program is generating more enthusiasm than it has in a while.

His current roster has a few with legit NFL aspirations, he says, and the Ivy’s no redshirt rules will create some complications, also some opportunities. Reno expects to have nearly all of his seniors back in 2021; they will have to take either the fall or spring semester off in 2020 to get their careers to fit in the eight-semester window.

“They’ll be able to go through graduation ceremonies in spring,” Reno says, “then come back and play the fall semester. Then they will have a great opportunity to train for the draft. It will also give some guys the chance to have do internships next summer, that they missed this summer.”

Central’s situation is a little different. The possibility of playing some type of schedule in the spring is still on the table, and his seniors, the ones who have pro hopes, would have to decide whether to play or take the time to prepare for the draft. McCarthy has his reservations about a spring season, if it is to be followed by a normal fall season in 2021.

“If you’re going to preach health and safety,” McCarthy says, “are you going to ask the kids to play, are we going to play 20 games in span of one year?”

There will be twists and turns for coaches to navigate, if things get better sooner than hoped, or if football remains in limbo longer even than anyone now dreads. For McCarthy, 41, through all the Zoom calls and phone conversations, the importance of person-to-person contact, being able to read a player’s moods and know when it’s time to drop everything and talk, has been driven home.

“We have their best interests at heart,” McCarthy says. “And if a kid thinks you’re using him as a tool to advance your career, he’s going to smell that out.”

Successful coaches, the champions, coach people, not football, keep their minds open and use even these most bizarre, unwelcome of times to become better, more empathetic.

“One thing this has brought to forefront to me,” Reno says, “is the moments we have together and how important they are, now when they’re taken away. You realize how important those team-building opportunities are. Take each one of those moments and maximize it. For me, it’s always keeping that big picture in mind, that no matter how consumed you are in a game plan for that week, the big picture, our mission, what we’re here for. Never let that mission become anything but priority No.1 and develop young men in a way where we’re developing the whole person.”