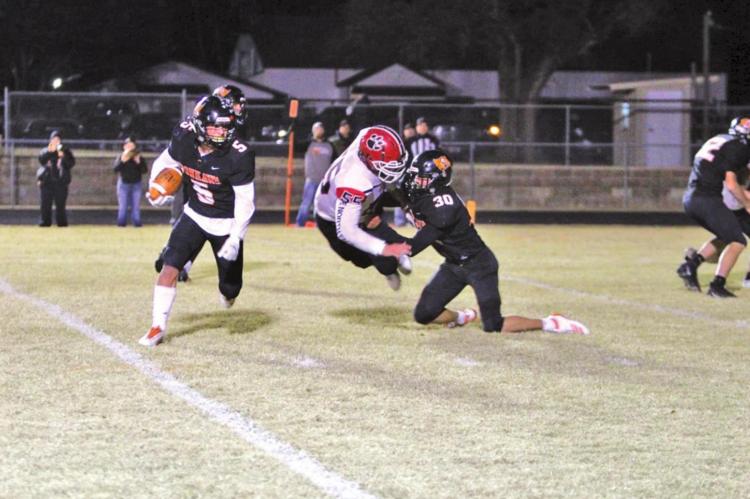 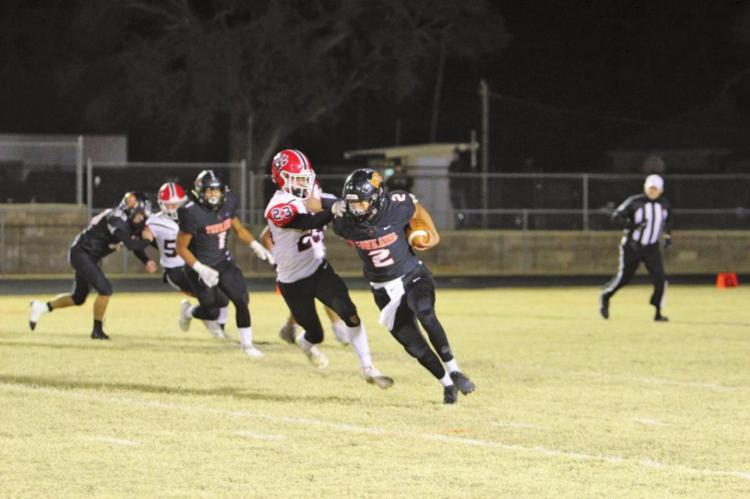 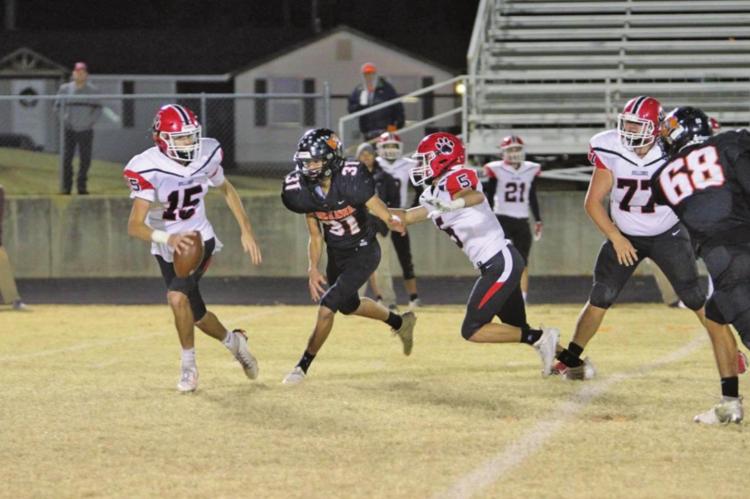 Breathe in, breathe out.

That’s what many Buc fans were saying to themselves after Friday night’s wild 28-20 playoff win over Stratford.

After coasting to a seemingly easy 20-0 first half lead, it all fell apart in the third quarter.

Two onside kick recoveries, a fumble and an interception spelled three straight touchdowns for the Bulldogs.

All of the sudden with less than ten minutes left in the game, it was all tied up 20-20.

For some reason, the Bulldogs didn’t onside kick after their tying touchdown early in the fourth quarter.

Jake Randall fielded the line-drive kick in the air and proceeded 34 yards to set Tonkawa up at the Bulldog 32.

Scoring wasn’t easy. It took 11 plays and some hard running from senior tailback Tristan Burdick. He finished the evening with 221 yards rushing on 33 carries.

After getting to a first and goal at the two, on fourth down, Burdick finally got across the goal-line. Then Ryan Morgan hit tight end Noah Campbell for the two point conversion, giving the Bucs a 28-20 advantage.

Stratford took over on their own 45 after the ensuing kickoff. On first down, Miccael Brown tackled their runner behind the line for a one yard loss. That was followed by a Jake Morgan 10 yard sack of the Bulldog quarterback. Ryan Morgan intercepted on third down, but it was nullified by the third 15 yard penalty of the night against the Bucs. But Stratford still needed nine yards on fourth down for a first down. The pass attempt was tipped away by Randall, one of three he had on the night.

With 2:01 left in the game, the Bucs took over. Burdick’s 15 yard third down run for a first down along with a 15 yard penalty tacked on top of it for unnecessary roughness set Tonkawa up at the Bulldog 13. From there, the Bucs went into victory formation for three straight downs and ran out the clock.

The Bucs’ first two touchdowns came fairly easily. Jaidyn Guzman scored on a 16 yard run, the fourth play of a 68 yard drive that was set up by a 48 yard pass from Ryan Morgan to Noah Campbell.

The Bucs went up 14-0 less than two minutes later with a 49 yard run by Burdick, that covered 61 yards in 3 plays, Burdick. He also ran across the two point conversion.

That’s when the Bulldogs started to show some life.

With a 29 yard pass play and a 15 yard penalty against the Bucs they were suddenly at the Tonkawa nine with first and goal. Tackles by Clay Massey, Brendan Ochoa, Burdick and Campbell plus a tipped pass by Randall stopped them cold at the Buc three yard line.

Tonkawa took over and moved the ball downfield with a 30 yard run by Burdick and a 10 yard pass play from Morgan to Randall.

On second down at the Bulldog 38, Stratford intercepted on a tipped ball and took over at their own 7. They proceeded on a drive of their own, getting all the way to the Buc 35 before being stopped on a fourth down pass play for no gain by Massey.

Tonkawa marched all 65 yards in 9 plays using most of the second quarter to score on a one yard run by Burdick with just 30 seconds left till halftime. Burdick had runs of 11 and 20 yards in the drive. Guzman had one of 15 yards.

It was 20-0 at halftime. The first onside kick of the second half resulted in a Bulldog TD drive.

The second one was stopped by a Ryan Morgan interception, after Stratford has moved the ball from the 49 all the way to the Buc 17.

Tonkawa took over at their own four after the pass theft and managed to get a first down at the 15 only to turn the ball back to the Bulldogs at their own 19 after a fumble.

That’s when Stratford scored the tying touchdown early in the final period.

Ochoa, Massey, Brown and Morgan were all in on tackles for minus yardage.

The Bucs host Dibble at 7 p.m. this Friday at Buc stadium in the second of six rounds of the Class A state championship playoffs.