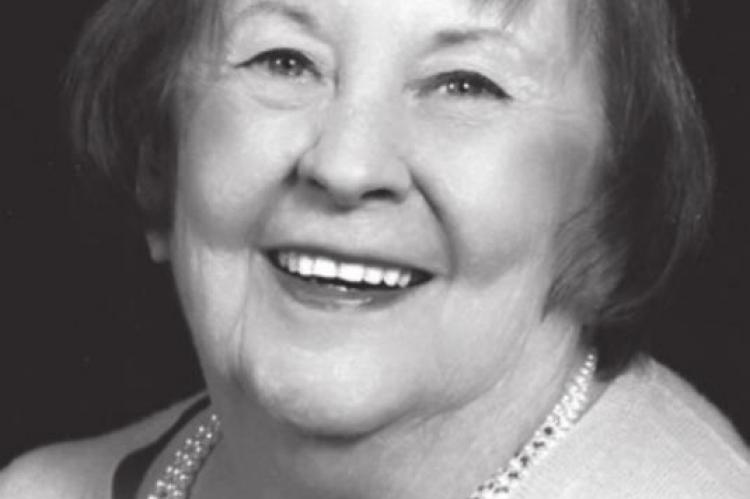 On Sunday, September 6th, 2020, Glenda Willis was called to her eternal home in heaven. She passed away mid-morning on a clear and sunny day. She lived to the age of 86.

Glenda was a devoted wife and loving mother to 2 children and 3 step-children. Nothing brought her more joy than the gift of 8 grandchildren and 6 great grandchildren from our beautiful non-traditional family.

Glenda was born on August 8th, 1934 at the Osteopathic Hospital to Glenn and Cora (Miller) North, also lifelong Blackwell residents. In her youth, Glenda developed a love of music. She had a beautiful voice which she shared with the High School Choir and was a skilled accordionist. Glenda and her friends could often be found at her mother’s beauty shop trying out the latest beauty trends. She also wore the maroon/white cheerleading uniform to cheer on her future husband (unknown at this time that she would one day marry one the players on the field) as he quarterbacked for the Blackwell Maroons Football team. She graduated in 1952.

After high school she headed out to Gulf Park, Mississippi to attend Gulf Park University which was an all-girls prep school. Glenda returned to finish her education at the University of Oklahoma with a bachelor’s degree in Business with emphasis in Fashion Merchandising in 1956. She dreamed of being a fashion buyer for a large store. Glenda always shared with her family how much she loved being a Tri Delta and life in Norman. So many wonderful stories of snowy car rides back to campus with friends, secret sorority handshakes, formal dances, and Sooner football games.

After college, Glenda moved to Dallas. She helped set up the bridal department at Neiman Marcus’s flagship store in downtown and then moved on to work for IBM. Glenda met and fell in love with James Ross Griffing. The two were married August 7th, 1965 back in her beloved hometown, Blackwell. The young couple moved to Kansas City and started a family; Glenn Ross born in August 1969 and Jennifer Lyn born in February 1971. More love emerged in Kansas City. Glenda got Glory, her first collie and the Dallas Texans became the Kansas City Chiefs. Glenda developed the ability to breed and show her dogs within the AKC. She was most proud of having a Ruff, who awarded Grand Champion. Ruff was photographed for Hallmark where his image was used for puzzles and cards. During this time, Glenda’s love for football now included another team dressed in her favorite color, Red. Glenda and her young family spent so many Sundays at Arrowhead cheering on the Chiefs.

Life changed when her first husband passed. As a widow, Glenda headed home to her high school reunion. And a new love emerged. Glenda was reunited with Jim Willis. After countless nightly phone calls and trips back and forth, they decide it was time to make it official. Love had found her again. She married Jim on February 12, 1993. She always wanted a big family with lots of brothers and sisters. This union not only gave her a soulmate but a huge family to help nurture and care for. She continued to work professionally by helping support her husband’s engineering consultant firm. She became active in ABWA. She was a trusted adviser to her husband and his work with the public. Glenda volunteered for numerous charities including the Blackwell Regional Hospital and Kiwanis. Glenda and Jim were members of the First United Methodist Church and there she served as chair for numerous committees.

Her children merged smoothly and lovingly with the three Willis children. She loved all of them as they had been hers exclusively all along. Her grandchild and the Willis grandchildren all loved her dearly.

Glenda was also preceded in death by her parents.

Glenda is survived by her husband, Jim; son, Glenn of Tonkawa; and daughter, Jennifer Lyn Roey, and husband Richie Roey; and granddaughter Sadie Grace Roey, all of Dallas, Texas.

Glenda was a Christian mother, and wife with a strong personality, a strong moral compass, and an enormous amount of grit. Whatever life gave her, she handled it with grace, tenacity, and laughter.

Memorial services will be held on Wednesday, September 16, 2020 at 1:30pm in the First United Methodist Church in Blackwell at 6th and Coolidge Avenue. Pastor Daniel Gibbens-Rickman will officiate. Burial will follow in Blackwell Cemetery.

In lieu of flowers, memorial contributions may be made to Blackwell Animal Control, sent in c/o Roberts and Son Funeral Home, 120 W. Padon, Blackwell, Oklahoma 74631.

On-line condolences may be made at www.robertsandsonfh.com.